Two aides of Governor David Umahi have been relieved of their duties over their alleged involvement in the murder of a PDP member. 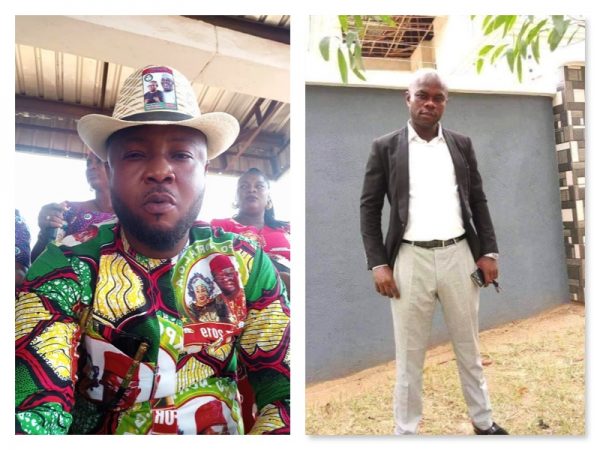 Governor Umahi's aides that were sacked
The Governor of Ebonyi State, David Umahi of Ebonyi has sacked two of his aides.
The sack followed their alleged involvement in the murder of a member of the Peoples Democratic Party in Afikpo LGA on 21 February.
The sacked aides have been identified as Uche Ibiam, the Coordinator of Ubeyi Development Centre of Afikpo North Local Government Area and Mr Ibiam Ogbonnaya, a Technical Assistant (TA) on security.
An incensed Umahi also asked the police to arrest them to face prosecution.
The police are yet to carry out the order.
DSP Loveth Odoh, spokesman of the police in the state confirmed the killing of Enyinnaya Ibiam during the councillorship primaries of the PDP in Afikpo.
“We can confirm the death of Mr Enyinnaya Ibiam during the primaries at Afikpo North Local Government Area of the state and the recovery of a vehicle belonging to the coordinator of Ubeyi Development Centre, abandoned at the area.
“Information reaching us indicates that the coordinator allegedly hired and stormed the scene of the primaries with thugs who shot sporadically, resulting in the death of one person and injuries to several people.
“When the vehicle was searched, we recovered a bag containing a locally made pistol and six live ammunition,” she said.
She said that the coordinator had not been arrested and promised that the matter would be thoroughly investigated and the culprits brought to book.
Governor Umahi’s directive was conveyed in a statement signed and issued by the Secretary to the State Government (SSG) Dr Kenneth Ugbala, in Abakaliki on Sunday.
“The governor further directs security agencies to carry out investigations and prosecute all those found guilty in the crime in accordance with extant laws of the Federal Republic of Nigeria.
“The governor assures Ebonyi people of their safety and his readiness to sustain the peace and tranquility reigning in the state,” he said.
Top Stories