Hollywood Producer, Harvey Weinstein has avoided immediate jail time for his sexual assault and rape conviction after being rushed to the hospital. 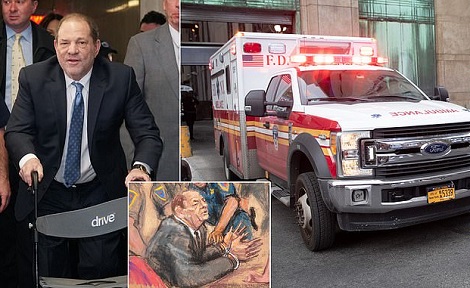 Harvey Weinstein was rushed to hospital by ambulance on Monday, shortly after being found guilty of r3ping and s3xually assaulting two women.

The disgraced Hollywood producer, 67, was said to have been redirected to Bellevue Hospital Center after suffering chest pains. A rep later confirmed he was suffering from high blood pressure and having heart palpitations.

Judge James Burke had initially ordered Weinstein to be taken to Rikers Island prison immediately, until his sentencing on March 11.

Weinstein was convicted by a New York jury of s3xually assaulting former production assistant Mimi Haleyi in his apartment in 2006 and r3ping aspiring actress Jessica Mann in a hotel room in 2013.

He was acquitted of the two most serious counts of predatory sexual assault, which each carried a potential life sentence. He was also found not guilty of first degree r3pe in relation to Mann.

Weinstein, who arrived at court using a walker for much of the trial, now faces a 29-year prison sentence, sealing his dizzying fall from powerful Hollywood studio boss to archvillain of the #MeToo movement.

When the jury of seven men and five women handed down their verdict after five days of deliberations, Weinstein told his lawyer: 'I'm innocent. I'm innocent. How can this happen in America?'

Weinstein said to have appeared stunned in the immediate aftermath of the verdict and did not move when approached by court officers.

He was then handcuffed before being led out of the courtroom via a side door without the use of the walker he relied on for much for much of the trial.

Weinstein was then taken away from the courthouse by an ambulance with its emergency lights and sirens on.