A banker living in Enugu state will spend the next 18 years in jail for engaging in fraud. 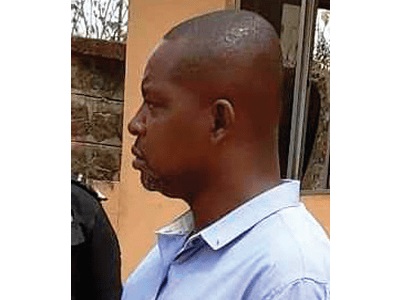 Onyekachi Nwosu
A former Relationship Manager with a bank in Enugu, has been sentenced to 18 years in prison by a Federal High Court in Enugu by the Economic and Financial Crimes Commission (EFCC).
He was found guilty on a six-amended-count charge bordering on forgery, altering and giving a loan with defective collateral.
EFCC Acting Head of Media and Publicity, Tony Orilade said the convict identified as Onyekachi Nwosu was found guilty on all the six-count charge and sentenced accordingly.
He revealed that Nwosu altered several account documents of his friend who he illegally granted loan to enhance his Visa application to United Kingdom.
Justice D.V. Agishi who ruled on the case, said the prosecution team proved its case beyond doubt.
Orilade said;
“On counts one and two, he was sentenced to five; while he is to serve two years each on counts three, four, five and six. The cumulative 18 years prison terms will, however, run concurrently.
“Investigation by EFCC revealed several professional misconducts by Nwosu who took undue advantage of his position as a Senior Bank Supervisor and account officer to forge a document titled LETTER of SET-OFF which he used to illegally grant a loan of N34,900,000 to a customer and his company from several fixed deposits of other customers without their knowledge nor consent.”
Top Stories