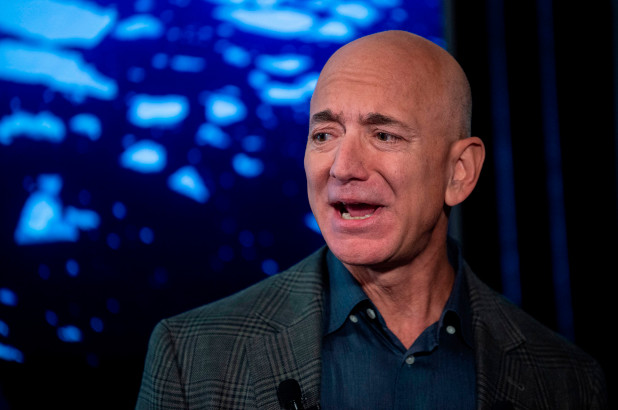 The world’s five richest people finished their worst week ever in terms of dollars lost on Friday, hemorrhaging a combined $36.5 billion as the spread of the epidemic punished stocks and stoked worries about a global recession.

That’s a sum that dwarfs the market capitalization of any number of US corporate giants, including Ford Motor Co., Clorox and Snap Inc.

The week’s biggest loser was Amazon chief Jeff Bezos, who lost $11.7 billion during five blistering days of stock trading, leaving him with a fortune of $116 billion that nevertheless remained the world’s biggest, according to Forbes.

Bezos — who earlier this month shelled out $165 million for a Beverly Hills mansion — was seconded by Microsoft co-founder Bill Gates, the world’s No. 2 tycoon, who is down $5.7 billion with an end-of-week net worth of $112.6 billion.

“I hope it’s not that bad, but we should assume it will be until we know otherwise,” Gates wrote about the coronavirus in a Friday article in the New England Journal of Medicine, calling it potentially the “once-in-a-century pathogen we’ve been worried about.”

The uncertainty pummeled US stocks, which weathered their worst drop since the 2008 financial crisis with the Dow Jones industrial average losing more than 3,500 points. The S&P 500, meanwhile, tumbled more than 10 percent into correction territory just a week after it hit a record high.

In all, the market turmoil cost the world’s 500 richest people a collective $444 billion, according to Bloomberg.

Legendary investor Warren Buffett, the chairman of Berkshire Hathaway and the world’s fourth-richest person, got slammed with $6.1 billion in losses this week, including a $919 million paper loss on Friday alone.

Nevertheless, the folksy billionaire chose to take the long view in an interview with CNBC earlier this week.

“The real question is: ‘Has the 10-year or 20-year outlook for American businesses changed in the last 24 or 48 hours?’” Buffett said. “If it gives you a chance to buy something you like and you can buy it even cheaper then it’s your good luck.”

Tesla CEO Elon Musk ranks only at No. 27 among the world’s wealthiest, according to Forbes, but he ranked No. 2 in terms of losses this week, losing $6.8 billion amid headlines that the electric-car maker’s factory in China had been temporarily shut down by the coronavirus.

Facebook founder Mark Zuckerberg suffered the indignity of dropping from the No. 5 spot in the global wealth rankings to No. 6, and has seen his fortune shrink this week by $6.4 billion, to $71.4 billion.

Luxury goods billionaire Bernard Arnault, who was previously the only other person in the world besides Gates and Bezos to have a 12-digit net worth, saw his fortune dip below the $100 billion threshold, losing $6.6 billion this week to leave him at $97.8 billion.