Ousted ex-governor of Imo state, Emeka Ihedioha has been given advice on what to do after losing out again at the Supreme court. 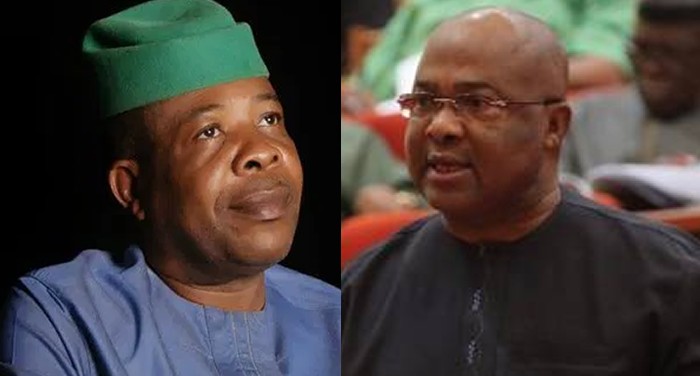 Emeka Ihedioha and Hope Uzodinma
The apex Igbo socio-political organisation, Ohanaeze Ndigbo has congratulated Governor Hope Uzodinma after the Supreme Court yesterday affirmed its decision stating that he's the Governor of Imo state.
Recall that the Supreme Court gave a final ruling yesterday in favour of Uzodinma after Emeka Ihedioha applied for a review of the judgment that sacked him.
Ohaneze called on Ihedioha to work with Uzodinma to make Imo state better.
Ohanaeze’s Secretary-General, Barr. Uche Okwukwu while reacting to the ruling, insisted that the application from the onset was aimed at distracting the Imo State Governor, Hope Uzodinma from delivering the dividends of democracy to the people of the state.
According to Okwukwu: “Ohanaeze Emeka Ihedioha and Hope Uzodinma are Igbo sons, we thank God for this judgment and from the beginning we knew the case was aimed at distracting Uzodinma from focusing on governance and delivering the dividends of democracy to the people of Imo State.
“We also knew ab Initio that the whole application to review the judgment irritating and aimed at provoking the people of Imo State who came out on March 9, 2019 and voted for Hope Uzodinma. Ohanaeze and I had asked INEC knew ab initio that they do not have the powers to exclude 300 polling units from final collation if the right things were done Uzodinma would have been declared governor last year.”
The Ohanaeze Secretary-General urged aggrieved parties to team-up with Uzodinma in delivering the dividends of democracy to people of the state.
“But be that as it may, we thank God Almighty, congratulate the governor and the people of Imo State and we call on all parties to shelve their swords and support the governor who belongs to Imo people.
“We have confidence in the governor that he would use the budge of Imo to develop the state. We have confidence in his capacity and ability to deliver.
“We call on all aggrieved to shelve their sword and support the governor and encourage him to be focused so he will deliver on the dividends of democracy,” he said.
Top Stories