There was a mild drama yesterday after an aide to Governor Akeredolu of Ondo state stormed out of a live interview. 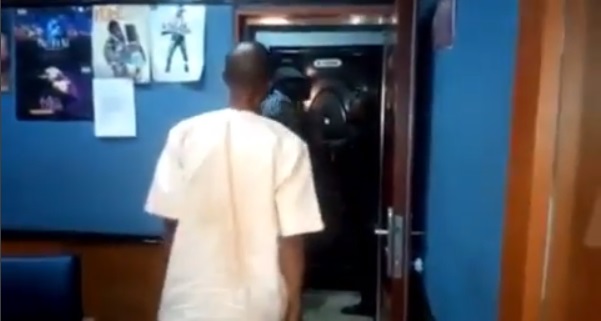 Gani Mohammed Ajowa storms out of live interview
The Senior Special Assistant to Governor Rotimi Akeredolu on new media, Gani Mohammed Ajowa stormed out of a live program on Breeze FM on Wednesday March 4 after being called a 'politician who works with the highest bidder' by Peoples Democratic Party (PDP) Assistant Director of Media & Publicity in Ondo State, Leye Igbagbo during a live discussion on the show.
According to LIB, It all started after Leye Igbabo and Gani Mohammed Ajowa were invited on ‘Fire 4 Fire’ show anchored by ace journalist, Adebisi Ajiboye popularly known as Sogigun.
They were to  discuss the achievements of Oluwarotimi Akeredolu who recently celebrated his third anniversary as Governor of Ondo state.
The duo however got into a heated argument after Leye described Ajowa as a 'politician who works with the highest bidder'.
Governor Akeredolu's media aide insisted that the statement was disrespectful and fired back at the PDP representative by describing him as "someone who lacks respect for his elders".
He thereafter stormed out of the show angrily after a shouting match.
Reacting to the incident, Ondo State PDP in its statement said it is shameful for a government paid media aide to ''insult and denigrate a fellow citizen of the state for any reason.''
The party disclosed that they monitored the radio program and found no reason whatsoever for Mr. Gani Mohammed of the APC to have ''insulted'' Hon Leye Igbabo. 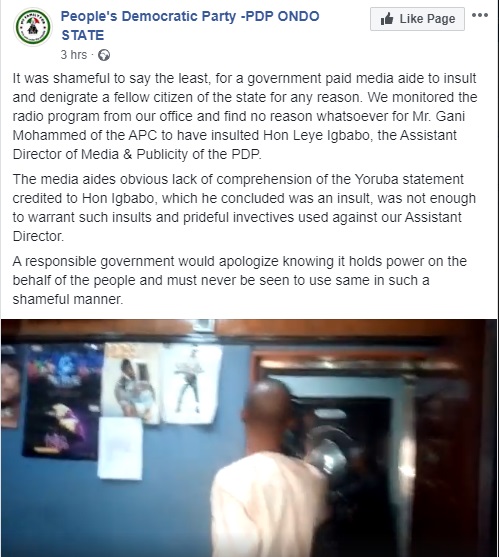 The statement reads:
"It was shameful to say the least, for a government paid media aide to insult and denigrate a fellow citizen of the state for any reason. We monitored the radio program from our office and find no reason whatsoever for Mr. Gani Mohammed of the APC to have insulted Hon Leye Igbabo, the Assistant Director of Media & Publicity of the PDP.
The media aides obvious lack of comprehension of the Yoruba statement credited to Hon Igbabo, which he concluded was an insult, was not enough to warrant such insults and prideful invectives used against our Assistant Director.
A responsible government would apologize knowing it holds power on the behalf of the people and must never be seen to use same in such a shameful manner."
Watch video below:

Governor Akeredolu’s media aide, Gani Mohammed Ajowa storms out of live radio program after being described as a “politician who works with the highest bidder” by PDP’s representative, Leye Igbagbo