The ruling All Progressives Congress has revealed names of those to lead the party following the suspension of Adams Oshiomhole. 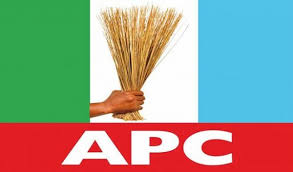 APC
The National Working Committee of the ruling All Progressives Congress (APC) has announced Waziri Bulama as its acting National Secretary.
The information was made public on Wednesday by the party’s spokesperson, Lanre Issa-Onilu, according to Premium Times.
However, a member of the NWC earlier questioned that announcement, saying the committee never reached such resolution and party chairman Adams Oshiomhole only ordered the party spokesperson to make the announcement after Mr Oshiomhole was suspended by a court on Wednesday.
Mr Waziri was approved alongside ex-Oyo governor Abiola Ajimobi and Paul Chukwuma who are to serve in the capacities of the Deputy National Chairman (South) and National Auditor of the party respectively.
He said their choice is based on their nomination from their regions’ leaders, a claim other leaders of the party have disputed.
The NWC’s decision was made public hours after an Abuja High Court suspended Mr Oshiomhole as the party’s national chairman.
Justice Danlami Senchi hinged his verdict on the earlier vote of no confidence passed on Mr Oshiomhole by his primary ward in Edo State.
Meanwhile, a few hours after the pronouncement of the national chairman’s suspension, a member of the NWC who is also the National Vice Chairman of the party (North-east), Salihu Mustapha, told PREMIUM TIMES in a phone interview about the controversy surrounding the nomination of Mr Waziri as the party’s acting national secretary.
“I believe you guys are aware of the meeting held about a month ago on that matter, which ended without a decision. Since then there has not been a decision as to the replacement of the secretary,” Mr Mustapha said.
However, the party in its statement issued on Wednesday night by its spokesperson, Lanre Issa-Onilu, insisted on the decision to approve Mr Waziri as the party’s national secretary by the NWC.
“The decision was reached on January 14, 2020 during the meeting of the NWC at the party’s national secretariat,” Mr Issa-Onilu said.
However, the timing of the announcement, as well as the fact it took almost two months, if Mr Issa-Onilu’s stance of January 14 adoption is to be believed, suggests there might be some truth in Mr Mustapha’s claim.
In his statement, Mr Issa-Onilu explained the reason for the ‘adoption’ of the officials.
“Following the resignation of H.E. Mai Mala Buni as the Party’s National Secretary in May 2019 prior to his election as the Governor of Yobe State, the party subsequently gave notice for a replacement from the zone.
“The NWC has also approved the nominations of Senator Abiola Ajimobi as the Deputy National Chairman (South) and Mr Paul Chukwuma as the National Auditor following nominations from the respective zones,” Mr Issa-Onilu said.
Meanwhile, a local government chairman of the party in Ekiti State, Michael Akinleye, has filed a suit challenging the the emergence of Mr Ajimobi as the region’s (South) deputy national chairman.
He accused the Mr Oshiomhole-led NWC of imposing the immediate past governor of Oyo State on them.
Messrs Akinyele and Gbenga Aluko were nominated alongside Mr Ajimobi for the then vacant position occupied by Niyi Adebayo before his appointment as Minister of Industry, Trade, and Investment by President Muhammadu Buhari after his (Buhari) second term election victory.
Top Stories