In what will come across as a really startling development, an apprentice has been caught having s*x with a goat. 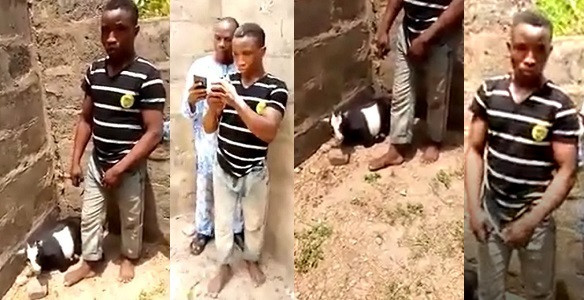 He was caught in the act

Punch Metro reports that the residents of Owode Quarters in Ado Ekiti, Ekiti State, were stunned on Wednesday when an apprentice, Peter David, was caught making love to a pregnant goat at an uncompleted building in the neighbourhood.

David, who claimed to be an indigene of Benue State, was caught in the act following the bleating of the goat which drew the attention of some residents and officials of the Benin Electricity Distribution Company on duty at the quarters that morning.

The residents said the goat was helpless for about two hours after the incident as it foamed in the mouth and bleed in the private parts.

Police later arrived at the scene and took away the man and the goat.

A resident, Mrs Oluwasola Ayodele, said the BEDC officials drew her attention to the incident while she in turn called others to witness the act she described as an abomination.

Ayodele said she called for assistance when the man wanted to escape through River Ofin to Ifeoluwa Community, but one Pastor Gbenga Ajulo caught him.

Ajulo, who is the minister in charge of Christ Apostolic Church, Throne of Mercy, Owode, said he was praying in the church when he heard the goat’s continuous bleating.

“About seven minutes later, I heard somebody calling my name and shouting for help. I came out and saw the man trying to escape and I caught him.

“When we sat him down, we asked him what happened and he confessed that he was having sex with the goat. For about two hours, the goat was foaming in the mouth and bleeding in the private parts.

“This is a bad omen. It is evil. I suspect the act is for ritual. There is the need for cleansing. Beyond, all these strange diseases in society are from acts like this. He would have contacted diseases from having carnal knowledge of the goat,” the cleric said.

The chairman of the neighbouring Ifeoluwa Community, Mr Abel Bankole, who described the occurrence as ‘strange,’ said there should be medical examination of the young man.

“He would have contracted diseases from such act. Something has to be done so that he does not infect others through sexual intercourse,” he added.

The police spokesman for Ekiti State Command, Sunday Abutu, who confirmed the incident, said, “Men of the Special Anti-Robbery Squad Department arrested a man that was sleeping with goat in the neighbourhood.

“He was interrogated and he confessed that he engaged in the act. He further said he had been doing such before he came from Ondo State. We are still interrogating him for more information as to why he is doing such. He will possibly be charged.”