Mortuary Attendant Arrested For Exhuming Corpse And Selling The Skull To Herbalist For N10,000


A mortuary attendant alongside his accomplice has been apprehended for exhuming a corpse and selling the head to a herbalist. 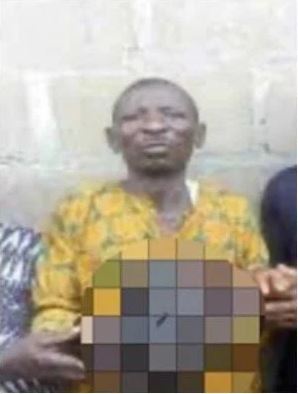 A 27 year old man identified as Seun Falana, a staff of the Trinity Cemetery Ajegunle has been arrested by the police in Lagos state have arrested in Lagos for allegedly exhuming a corpse from where it was buried, severing the skull and selling it to a herbalist, Olawale Shodolamu, for N10, 000.

Spokesperson of the state police command, Bala Elkana, said the duo were picked up after one Dauda Tijani of Number 23 Omowunmi Street, Orege, Ajegunle, was arrested with a polythene bag containing a human skull by a team of policemen from Area E Command, Festac while on routine stop and search patrol at Alakija Bus Stop along Lagos-Ibadan, Badagry express way.

Shodolamu told the police that he usually grinds the human skull together with other substances to prepare herbs and charms for his customers.

Falana has since been arrested and he confessed digging out graves to remove human skulls to sell to herbalists.

The police say investigation is ongoing and that the suspects will charged to court soon.