A top All Progressives Congress member has assumed leadership position following the ouster of Adams Oshiomhole. 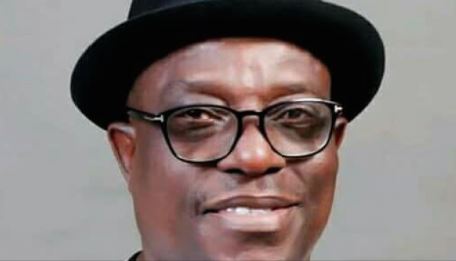 Victor Gaidom
Adams Oshiomhole is no longer the chairman of the All Progressives Congress following his removal by the Federal Captial Territory High Court in Abuja.
Even after securing a counter-order from another court in Kano, the party's henchman has been sidelined.
This was revealed by Victor Gaidom who has since assumed position as the acting national secretary of the All Progressives Congress (APC).
Gaidom said he has been directing activities of the party in the absence of key officials.
Gaidom said this while commenting on the crisis rocking the ruling party.
Gaidom, who had told reporters that the party would comply with the court order, later issued a notice of the national executive committee (NEC) of the party.
But in a statement, Lanre Issa-Onilu, APC spokesman; and Babatunde Ogala, APC national legal adviser, tackled Gaidom, describing his action as illegal.
Gaidom, however, maintained his stand, saying since the party’s constitution gives him the powers to hold sway.
“For the purpose of clarity and putting the issue in proper perspective, I wish to state that the decision to call for an emergency National Executive Committee meeting for March 17, 2020 was taken in strict compliance with the constitution of the party,” he said.
“It is on record that the erstwhile National Chairman, Mr. Adams Oshiomhole, has been suspended by a court of competent jurisdiction. The two deputy national chairmen are no longer in office.
“The next most senior party office should be the secretary-general of the party. But as we all know, the erstwhile national secretary in the person of Hon. Mai Mala Buni is now the Executive Governor of Yobe state. Hence, as the acting national secretary, I have the constitutional power to steer activities of our great party.
“This is the power I exercised on March 6 and March 7. 2020, calling for an emergency National Executive Committee (meeting) of our great party in line with Article 25 (B) (ii) of the constitution of our great party.”
Gaidom said the meeting would afford the party an opportunity to address the party’s challenges.
Top Stories