Deposed Emir of Kano, Muhammadu Sanusi II yesterday welcomed one of his wives at his new home in Nasarawa. 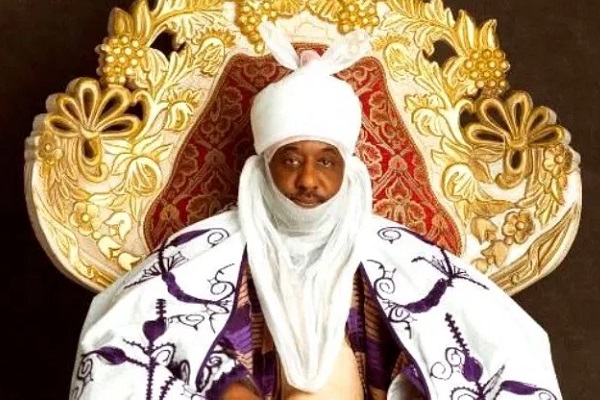 Deposed Emir of Kano, Muhammad Sanusi II
One of the wives of the deposed Emir of Kano, Muhammadu Sanusi II has visited him yesterday at his new abode in Awe town in Nasarawa State, according to a report by Daily Trust.
It was gathered that wife of the dethroned emir arrived Awe at about 11.15 am along with three of the deposed emir’s children. She arrived in a white SUV with tinted glasses and was escorted by mobile policemen and officers of the Department of State Security (DSS) who were conveyed in two Toyota Hilux vans with Kaduna State Government number plates.
The Emir of Awe, Alhaji Umar Isa Abubakar; Chief of Azara, Dr Kabir Musa Ibrahim and Chairman of Awe Local Government Area, Alhaji Umar Da-Akano, were also said to have met with the deposed emir.
The people of the host community in Awe said they were overwhelmed with Sanusi’s presence but unhappy with his dethronement. Governor Abdullahi Umar Ganduje presents letter of appointment to Emir of Kano, Alhaji Aminu Ado Bayero, while the Deputy Governor, Dr. Nasiru Yussuf Gawuna, looks on at the Government House, Kano yesterday A resident, Mallam Ibrahim Usman Fulani said: “I am a Fulani man who rears cows. When I heard the news, I rushed to town to confirm. I wanted to travel but I will not until I observe Friday congregational prayer with him. Many people are waiting for that historic moment,” he said.
Locals said power supply was being rationed on one-day-on and one-day-off basis in the area.
Awe is about 90 kilometres from Lafia, the capital of the state. It has a good tarred road but lacks basic amenities as residents buy water from vendors. A cart of 10 gallons containing 20 litres is sold for N200. Upon arrival, Sanusi II was taken to a two-bedroom bungalow with a guest house wing where he spent the night.
The apartment it was gathered, belongs to an official of Awe Local Government Area.
According to a source, the place is a temporary abode for the ex-emir as another ‘befitting’ accommodation was being prepared for him.
Top Stories

BBNaija Reunion: Drama As Kaisha Walks Out of the Show After Neo Failed to Admit He Liked Her (Video)
Recent Stories