A plane which was carrying some Manchester United club fans has reportedly made an emergency landing. 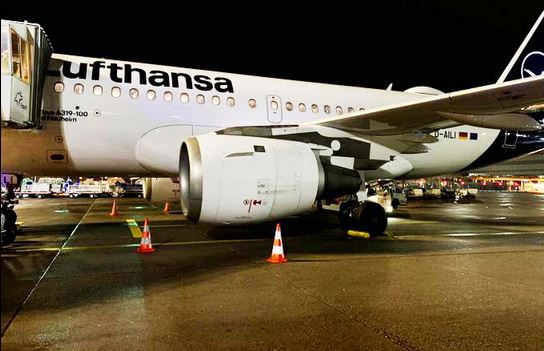 The plane was forced to land in Frankfurt on Tuesday

The plane was forced to land after the engines developed.

The game to be held on Thursday will be played behind closed doors in Austria because of the outbreak of Coronavirus.

The Europa League last-16 tie will be played at Linzer Stadium on Thursday but no fans will be allowed in.

However, some fans who have bought tickets still traveled to Austria and after the emergency landing, they had to spend Tuesday night in Germany.

According to The Sun, no casualty was recorded as passenger escaped unscathed

Describing the incident, a Journalist, Simon Peach who was onboard said passengers could see an “orange glow” after the engine lit up mid-flight.

He wrote: “From Frankfurt back to Frankfurt via an emergency landing.

“Not great to see an engine light up mid-air. An unplanned night in Germany awaits.”

Following the outbreak of COVID-19 in Wuhan, China over 3800 deaths have been recorded as countries face challenges of curtailing the spread of the deadly disease.