The governor of Kaduna state has visited deposed Emir of Kano, Muhammad Sanusi II in Nasarawa. 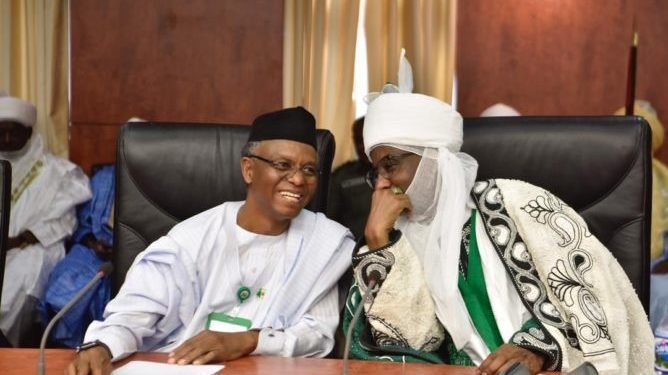 Governor Nasir El-Rufai and deposed Emir Sanusi
Governor Nasir el-Rufai of Kaduna State has paid a short visit to Alhaji Muhammadu Sanusi II, in Awe, Nasarawa State.
Sanusi has been staying in Nasarawa following his removal as Emir of Kano by Kano state government.
The governor left Kaduna on Thursday morning and headed to Awe, Daily Trust reported, quoting an unnamed security source.
However, the state government has yet to confirm the news.
Recall that Sanusi got two appointments from the Kaduna State Government led by el-Rufai less than 48 hours after his dethronement.
He was first appointed the Vice-Chairman of the Kaduna Investment and Promotions Agency (KADIPA) on Tuesday, before being appointed Chancellor of the Kaduna State University (KASU) on Wednesday.
Sanusi moved to Awe LGA from Loko community in Nasarawa LGA of Nasarawa State on Wednesday.
Both men share a great friendship, which the deposed Emir alluded to in 2017.
Taking to Instagram, he wrote: “It’s a great pleasure watching my friend and brother Governor @nelrufai (Nasir Ahmad Elrufai) talk to us about his vision for making ‘Kaduna Great Again’.
“I was a bit worried about that vision because it reminds me of Donald Trump’s ‘Making America Great Again’. Everything I know about Nasir Elrufai tells me he’s not exactly a Donald Trump double. I’ve always talked about my friendship with Elrufai, we’ve been friends since we were teenagers and as I said during the lunch of his book people keep asking me.
“How come you’re always friends with this Elrufai? And I say: I need him because he is the only in the public that makes me look like a moderate. Usually, people go to my friends, including the Sultan; they go to him and say: Look! Talk to the Emir of Kano; just talk to your friend. He is too radical.
“But what I find is that people come to me and sa:; Please talk to your friend Nasir. As long as I continue to have that, I’m comfortable I’m not the most extreme and more radical public officer, so I’ve to keep close to Governor Nasir Ahmad Elrufai.”
Top Stories