A woman who went into a coma woke after a crash has woken up omy to find out her man has died. 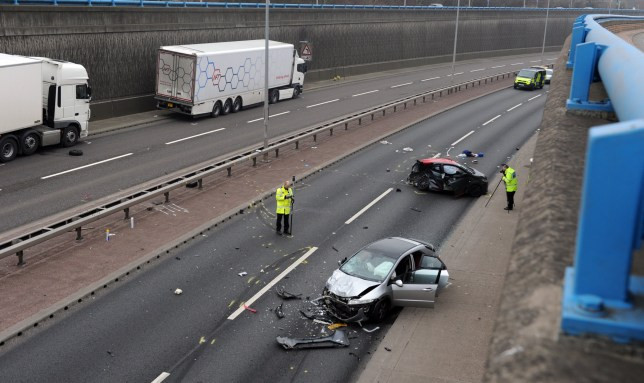 A heartbroken mum-to-be woke up from a coma to find her boyfriend and unborn son had died in a crash.

Bethany Leese's unborn child and partner Joshua Sanna were killed when Sanna crashed on the A50 near Stoke-on-Trent while being pursued by police.

An inquest heard that Joshua Sanna and Bethany Leese were driving down the A50 in Longton, Staffordshire when a police officer in an unmarked BMW spotted their Toyota Aygo hire car with no lights on.

This prompted the officer to turn on the lights and switch on his sirens, causing 19-year-old Sanna to panic and speed off.

The police officer then attempted to stop the vehicle near Longton, Staffordshire, but Sanna turned the wrong way and collided head on with two vehicles while trying to flee the scene.

Mr Sanna and their unborn baby both died after the couple were catapulted through the windscreen.

Bethany suffered a brain injury in the crash, and how has limited use of one arm after the horrific incident on April 15 2018.

She told the inquest Sanna only held a provisional license, and had paid a friend to rent the car but feared he could be charged for "taking a vehicle without consent".

Devastated Bethany, who was 18 at the time, told Stoke-on-Trent Coroners' Court: "I feel like I lost my life in that crash. I woke up from a coma and asked for my boyfriend only to be told he had died.

"I don't remember much of my life before the crash. I remember him picking my flat keys up and constantly ringing him in the night because I wanted a McDonald's."

She added: "I remember screaming 'stop' and then telling him not to stop because I was in care and would have had to go to social services."

The court also heard that digital scales, money and drugs were also found in the vehicle.

But Bethany claims that Sanna, from London, was not involved in drug dealing.

She said: "He wouldn't have picked me up with drugs in the car. I had a go at him when he was smoking weed. The drugs in the car would not have been in connection to Josh."

The officer who pursued Sanna, named only as L33, told the court that he was alerted to the car as it was  driving at "excess speed".

He said he was given the green light to follow the boy's car from the Staffordshire Police control room, and attempted to stop the distinctive Aygo by nudging it onto a grass verge on an A50 slip-road.

But after the pursuit he claimed the car "came straight across my path" and continued into "a tarmacked area, over a kerb, and along the A50 the wrong way".

The officer later aborted the pursuit and pulled over onto the side of the road.

He was informed soon after abandoning the mission that the Toyota had been involved in a collision.