So Sad! Face Of Reverend Sister Who Died While Saving Her Students From Abule Ado Explosion (Photo)


A school administrator has sacrificed her life while trying to save her students during Abule Ado gas explosion. 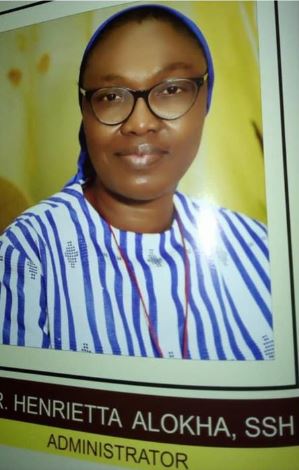 Henrietta Alokha
An administrator at Bethlehem Girls College, Abule Ado, Amuwo Odofin local government area of Lagos state identified as Henrietta Alokha was among those who lost their lives in the explosion which occurred on Sunday morning.
The National Emergency Management Authority (NEMA) put the death toll at 15 as of Sunday evening.
The sad incident left students trapped in the boarding school, owned by the Catholic Church, during the fire outbreak that followed the explosion.
A mass celebration was ongoing in the school when the incident happened and Alokha was reportedly among those who assisted trapped students to escape from the scene but when it was time for her to leave, she could not make it out alive.
Details of her death are still sketchy but there are reports that some of the students also lost their lives in the incident.
A resident had earlier told TheCable that a Catholic priest involved in the rescue operation was killed by a pillar which fell when part of the building caved in.
NAN reported that at least 60 students who were rescued were taken to the Nigerian Navy Reference Hospital at nearby Satellite town, for treatment.
The Nigerian National Petroleum Corporation (NNPC) said a truck which hit gas cylinders around the corporation’s pipeline right of way triggered the explosion.
Many houses were destroyed while vehicles got damaged in the explosion which reverberated across Nigeria’s most populous city.
Residents and witnesses counter their losses. At the headquarters of the Lagos province 3 of the Redeemed Church of God (RCCG) located on 24 Road, Festac town, the explosion which occurred more than a kilometre away from the church premises, shattered glass windows, injuring worshippers.
A parish of the First Baptist Church near the RCCG parish also lost a part of its roof. The roof of a parish of the Living Faith Church (Winners Chapel) located at 7th avenue, Festac, was also blown off in addition to that of the Ark Parish of the RCCG at first avenue.
The Odic Plaza, a motor parts mall and warehouse, Bush Bar Hotel, Green Horse Plaza which houses tyres, Arch Angel Catholic Church, Chino Plaza with many goods in it, and a mechanic village, all located inside the Trade Fair Complex, Ojo, were all hit by the explosion.
Top Stories