AGN president, Emeka Rollas, defends the decision of the guild to make Senator Elisha Abbo its patron despite scandal. 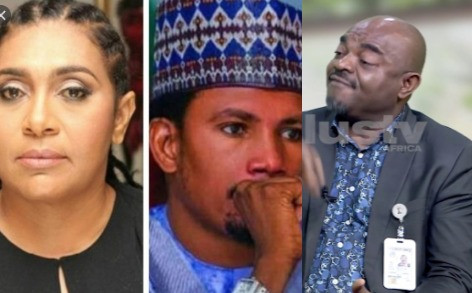 Emeka Rollas, the president of the Actors Guild of Nigeria, AGN, has defended the decision of the guild under his leadership to appoint slapping senator, Elisha Abbo, as one of its patrons.

Yesterday March 16th, veteran actress, Hilda Dokubo, shared a video on her IG page expressing her displeasure over the decision of the guild to appoint Senator Abbo as their patron.

Recalling how Abbo was caught on camera assaulting a nursing mother in a sex toy shop, the veteran actress stated that making an "abuser of women a Patron of Actors Guild of Nigeria is an unpardonable abuse".  She called for his delistment and insisted that every attempt at rubbishing societal values with such appointment must be stopped.

In an interview with PlusTV, Rollas asked if anyone is holier than Senator Abbo who has apologised for his action. He said there are better ways Hilda Dokubo could have registered her displeasure instead of going on social media to call the guild out.

Watch the interview where he defended his action below;

"Who is holier than Senator Elisha Abbo?" - Emeka Rollas , president of the Actors Guild of Nigeria AGN , defends decision of the guild to make Elisha Abbo its patron