The rush for chloroquine has seen its price increase almost six times in Nigeria. 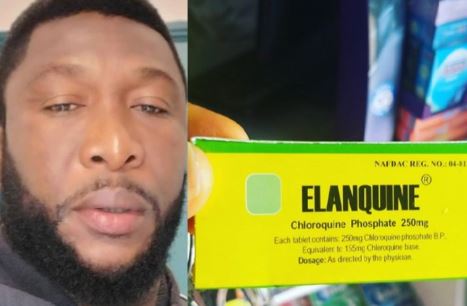 TChidi Chikere
Actor Tchidi Chikere has raised alarm saying that the price of Chloroquine has increased almost six times the normal price it was formerly sold.
The latest development came after US President Donald Trump claimed that the FDA had approved use of Chloroquine for treatment of coronavirus.
Tchidi Tchikere took to social media to reveal the amount he bought a pack of the drug.
He wrote: “JUST BOUGHT CHLOROQUINE NOW FOR 4,000 NAIRA PER SMALL PACK. USED TO BE 700 NAIRA PER PACK..NAIJA! EXPLOITATION.”
Recall that today, a Nigerian man was reportedly rushed to the hospital unconscious after overdosing on chloroquine.
This story was shared online by popular doctor, @Aprokodoctor. He wrote:
”Breaking News They just rushed someone into a hospital, he was unconscious What happened? Went to drink a lot of chloroquine because they said chloroquine cures Coronavirus. Has been giving his kids too Nigerians, every drug is a poison including chloroquine Use your head “
He added: ”Yes, hydroxylchloroquine showed promise in some patients with the COVID19 infection. But there is further testing before it’s approved as a treatment for the new Coronavirus. There are side effects of every drug. EVERY WHAT? EVERY DRUG. You don’t just get drugs and swallow “
Top Stories