The story has been told of a young hairdresser who was shot dead by a member of a vigilante in Lagos. 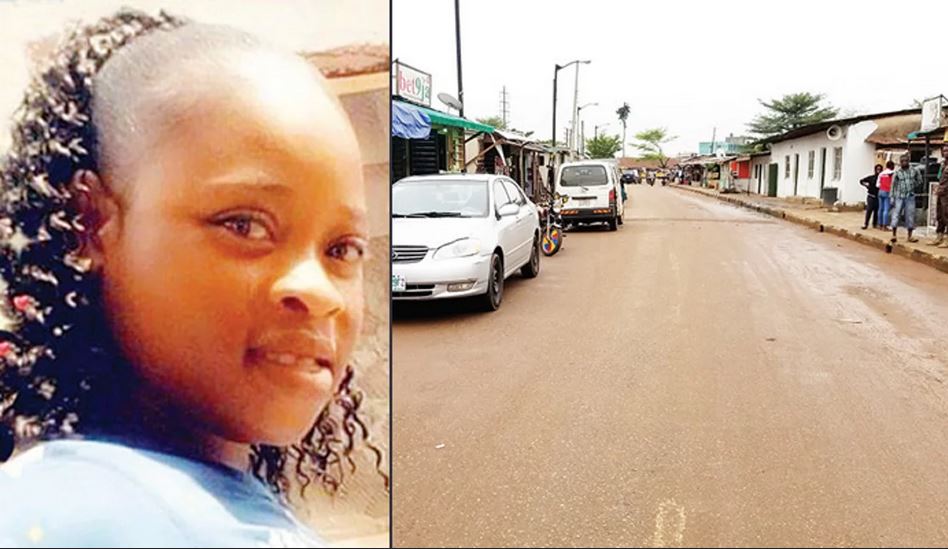 According to a report by Punch Metro, a member of the Onyabo Vigilante Group in Ogijo, identified simply as Shina, is on the run after allegedly shooting to death a hairdresser, Aishat Adedimeji, in Odogunyan, Ikorodu North Local Council Development Area of Lagos State.

It was gathered that Aishat’s lover, Rasheed Owamoyo, and his club members had gone to the Ola Guest House on Ita Oloja Street, Odogunyan, on Sunday when she decided to join them.

After enjoying themselves at the guest house, the club members and Aishat were said to have come out to where their vehicles were parked in front of the guest house when Shina reportedly accosted them around 7pm and allegedly shot the hairdresser in the neck.

The 28-year-old reportedly died on the spot and a picture in possession of our correspondent showed her corpse lying in a pool of her own blood on the road, where the incident happened.

A bullet hole was also seen on Aishat’s neck. The victim was dressed in a white top and a blue jean.

When PUNCH Metro visited the area on Tuesday, the owner of the guest house, Hassan Olanukan, said he immediately apprehended Rasheed’s club member, Akinyemi Okunlola, who was standing beside Aishat during the attack.

Olanukan alleged that the fleeing suspect and Okunlola had issues to settle before the crime was perpetrated.

He said, “They are regular customers but after they took some drinks at my guest house, they left for their cars. I was inside when I suddenly heard a gunshot. I quickly rushed outside and saw the woman lying on the floor; so, I held one of the club members down till the personnel of the Sagamu Police Division came to arrest him. The victim’s boyfriend was also arrested.

“The person, who shot the girl, is a security guard employed to watch over the community and he ran away after committing the crime. He wore a top with the inscription, Onyabo Vigilante Group, and we have confirmed that he is a member of the group. I even went to their base, but he was nowhere to be found.”

Rasheed told our correspondent that he was the one, who invited Aishat to join them at the guest house, but urged the police to intensify efforts to arrest Shina in order for him not to suffer for a crime he did not commit.

When Okunlola was asked about the issue he had with the fleeing suspect, he said, “I was beside Aishat when Shina walked up to me and asked me to give him money. I told him that the money on me was to pay my transport fare home and all of a sudden, he brought out a gun and in an attempt to shoot me, the bullet hit Aishat and killed her.

“I searched everywhere to apprehend him, but he was nowhere to be found. So, the police were informed and I was arrested.”

The hairdresser’s father, Taiwo, said he was at home when someone called him on the telephone to inform him that his daughter had an accident, adding that he got to know that Aishat had been shot dead when he got to the police station.

While urging the police to release his daughter’s corpse for burial in accordance with Islamic rites, the 57-year-old, however, said the fleeing suspect had accused Okunlola of committing adultery with his wife before perpetrating the crime.

The Commander, Vigilante Group of Nigeria, Ogijo Division, Joseph Oduyebo, who noted that rumours had spread that members of his group were responsible for Aishat’s death, said, “Our men assisted the police in evacuating the corpse to the Ikorodu General Hospital mortuary.

“When the incident happened, people started speculating that our members were responsible for the girl’s death, but while working jointly with the police on the case, we discovered that the suspect was a member of the Onyabo Vigilante Group.”

A member of the Onyabo Vigilante Group in Odogunyan, Ojo Yekini, said efforts were on to arrest Shina, whose whereabouts are unknown since he perpetrated the crime.

The Provost Marshal, Onyabo Vigilante Group in Ikorodu, Matthew Adesanya, said, “Shina is not a member of Onyabo, but one of our members, Yekini, employed him to serve as a security guard in a particular place. But if Yekini refuses to produce Shina, he will be handed over to the police.”

When contacted, the state Police Public Relations Officer, Bala Elkana, said, “Our station on Sagamu Road in Ikorodu responded to a distress call and on arrival, our personnel met two persons, who were held down, and one other person was lying down.

“The person who was down was taken to hospital and was confirmed dead, while the two persons held down were brought in for questioning to ascertain what happened, because there was an altercation before the incident.

“We have also identified that the fleeing suspect, who was alleged to have shot the victim, was a member of a vigilante group and we have launched a manhunt for him. The Commissioner of Police in Lagos State, Hakeem Odumosu, has ordered the transfer of the case to the State Criminal Investigation and Intelligence Department, Panti, Yaba, for discreet investigation.”