How Coronavirus Is Changing The Way Nigerians Live


Apparently, the outbreak of the coronavirus has changed the way Nigerians live in their country. 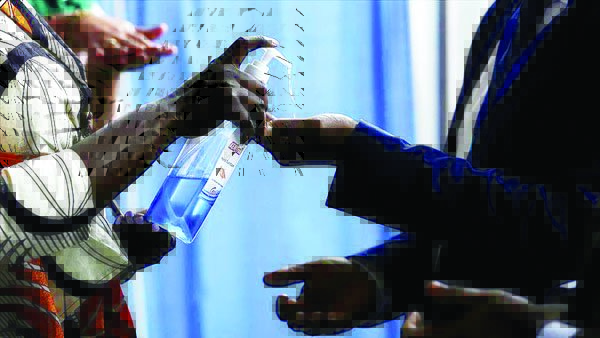 You remember, Hopscotch, that game children play by drawing squares or rectangles in the sand and hopping from one box into another? Adults played it in Ibadan on Monday morning. Well, kind of.

A drugstore in Ibadan, Kunle Ara Pharmacy, came up with the simple but ingenious social distance idea for checking the spread of Coronavirus Disease (COVID-19) among its customers.

The lines, drawn on the floor of the crowded compound, showed shoppers the distance they should keep from each other to reduce their chances of having contact with a ‘possible’ carrier of the virus.

Kunle Ara Pharmacy’s social distancing brainwave is one unexpected way COVID-19 is changing the way Nigerians now live.
With one COVID-19 death recorded and 44 cases confirmed yesterday by the Nigeria Centre for Disease Control (NCDC), measures cannot but be introduced to curtail the spread.

All over the country, weird is gradually becoming the norm as people try to adapt to a faceless, highly contagious and dangerous enemy.

Until the Coronavirus outbreak, Nigerians had the habit of telling anyone sneezing: Sorry! That has now changed. People sneezing are viewed with suspicion and avoided. In fact, people sneezing now find themselves being the ones apologising for the act.

In Lagos, for instance, one noticeable way people’s lives are being affected by social distancing is in their mode of transport.

The Lagos State Government on Monday banned passengers from standing on public buses, to prevent overcrowding.

The problem is, Lagos is one the world’s most densely populated cities and, yesterday morning, passengers at most of the Bus Rapid Transport (BRT) terminals scrambled for position in buses in defiance to the social distancing directive.

A video surfaced on the internet showing some of the passengers practically cramping on one another as they jostled to collect tickets from officials.

But by afternoon, sanity prevailed and orderly passengers maintained a safe distance from one another.

In Abuja, more than 70 passenger vehicles were impounded for flouting a directive not carry overload.

Banks and shopping malls were not left out of social distancing.

Several banks with small banking halls now limit the number of customers that can enter at a time. Others wait outside in well-spaced queues.

Of course, bowls of water and soap or sanitisers are now a regular feature outside their premises for compulsory handwashing.

No one knows when humans started shaking hands, but, according to history.com, humans have probably been doing it in one form or another for thousands of years.

Same goes for hugs among same or opposite sexes.

Before the virus broke out, Nigerians’ love for travelling was legendary. The country’s airports were always busy. A plug has been pulled on that. In order to check the spread of the coronavirus, the Federal Government has banned international flights into Murtala Muhammed International Airport, Lagos, and Nnamdi Azikiwe International Airport, Abuja. The Nigerian Civil Aviation Authority (NCAA) announced the ban in a statement signed by its Director General, Musa Nuhu, on March 21.

“Henceforth, all airports in Nigeria are closed to all incoming international flights with the exception of emergency and essential flights.”

NCAA added that domestic flights would continue operations at all airports across the nation.

He listed the countries as: China, Italy, Iran, South Korea, Spain, Japan, France, Germany, Norway, USA, UK, Netherlands and Switzerland, pointing out that Austria and Sweden were later added, bringing the number to 15.

“Data from the NCAA showed that from January 2019 to December 2019, the foreign airlines recorded 15,474 flights into the five international airports in Nigeria with an average of 298 flights weekly,’’ the minister said.

IATA, an umbrella body for 290 airlines globally, added that Nigeria would also lose approximately 2.2 million passengers, and that the spread of the virus, that was first reported in Wuhan, China, at the beginning of December 2019, would negatively impact the aviation industry worldwide.

With the announcement of each infection, Nigerians are becoming more reluctant to shake hands. More people are adopting the World Health Organisation (WHO)’s recommended greeting styles.

So, don’t be surprised if you see people doing any of these styles: The wave, salute, elbow bump, bow, Namaste greeting, foot bump or hip bump.

How long can we keep this up? No one really knows. Probably for as long as the virus is a threat.

Public health experts believe social distancing is the best way to prevent a truly horrific crisis, not just in Nigeria, but across the world.

The measure is even more important in the country because of our fragile healthcare system.

Basic hospital equipment in first world countries that are a necessity for combating the virus, such as ventilators and Intensive Care Unit (ICU) beds, are a luxury here. Not that they are all a country needs to suppress the spread. Italy, for instance, is reeling in the throes of the pandemic and has the highest death rate in the world.