Drama As Villager Fakes His Own Death To Avoid Coronavirus Lockdown


A villager has reportedly faked his own death just to be able to avoid the coronavirus lockdown. 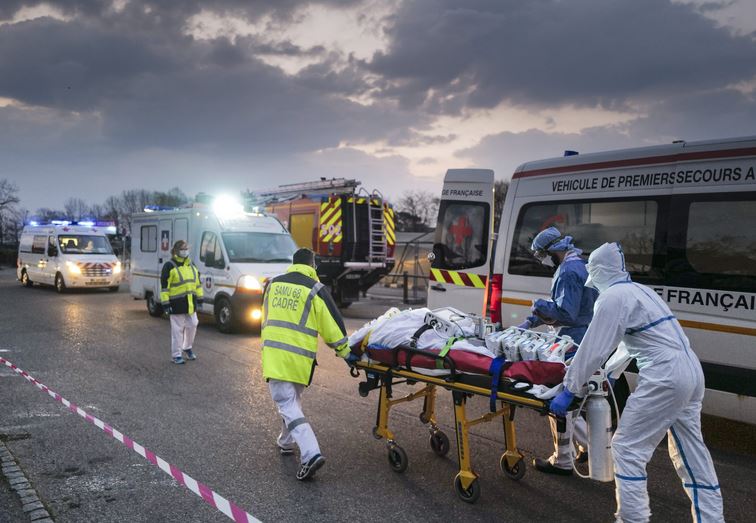 Emergency medical personnel carries a patient affected with coronavirus (Covid-19) from a military hospital to an ambulance before being transported aboard a medicalised TGV (high-speed train) to be evacuated towards hospitals of other French regions on March 29, 2020 in Mulhouse, eastern France, amid the spread of the COVID-19 (new coronavirus) pandemic. (Photo by SEBASTIEN BOZON / AFP)

An Indian man, Hakim Din, from Kashmiri village has faked his death and travelled more than a hundred miles in an ambulance with four others.

He did this in a desperate bid to circumvent India’s virus lockdown and return home, police said Wednesday.

According to the Agence France Presse, AFP,  Hakim Din was being treated for a minor head injury at a hospital in Jammu when an ambulance driver suggested the 70-year-old fake his death to get past checkpoints, police said.

Din and three other men wanted to return to Poonch, a far-flung region in Indian-administered Kashmir close to the de facto border with Pakistan.

The region’s Superintendent of Police, Ramesh Angral, said the four men and the driver travelled more than 160 kilometres (100 miles) in the ambulance, passing many checkpoints using a fake death certificate from the hospital.

“The ambulance was stopped at the last checkpoint before they could reach home,” Angral told AFP.

“A policeman there immediately figured out that the man lying covered inside the ambulance could not be dead.”

The men were arrested and quarantined separately, Angral said, adding that they faced charges of “cheating and defying the government’s prohibitory orders”.

There are no known coronavirus cases in the Poonch region.

18-Year-Old Boy Breaks Into Police Station In Osun...You Won't Believe What He Did There