Coronavirus pandemic has taken a devastating turn in the UK after killing more than 300 persons in 24 hours. 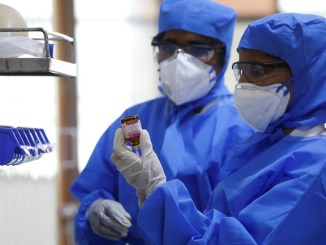 Coronavirus
A staggering 381 including teen, 19, with no health problems have died of coronavirus in just 24hrs.
According to Sun UK, Britain's positive Covid-19 cases have also jumped - with 25,150 infected people - up 2,706 from yesterday.
The latest figures from the Department of Health reveal 381 people have died in 24 hours after a rise of 180 deaths in the same time period yesterday.
In England, the NHS today confirmed the death rate had also more than doubled from 159 yesterday to 367 today in the biggest 24-hour leap so far.
The latest victims were aged between 19 and 98 - with 28 having no previous medical conditions - bringing the total death toll in the country to 1,651.
The 19-year-old is the youngest coronavirus victim in the UK with no underlying health conditions.
Last week, the heartbroken family of a "very healthy" 19-year-old Italian chef living in London revealed he had died from suspected coronavirus.
Luca Di Nicola from Enfield, North London, was told by medics he had "nothing to worry about" after falling ill, La Repubblica newspaper reported.
The teen passed away on March 24 a day after being rushed to hospital with collapsed lungs.
North Middlesex University Hospital NHS Trust confirmed today a 19-year-old man had died after testing positive for the disease following his death.
Public Health Wales confirmed there have been seven further deaths - bringing their total to 69.
While in Northern Ireland, six more people have died, with their total deaths now at 28.
Today's figures only include those who have died in hospital after testing positive for the disease, so the true death toll is actually higher.
From the start of the crisis until March 20, at least 40 more people died from coronavirus in England and Wales than previously thought after hidden deaths at home were revealed for the first time.
New figures revealed 210 people died in England and Wales from the killer bug during that time period - 23 per cent more than official NHS numbers have shown.
NHS England and Public Health Wales had recorded 170 people died in hospital up to that date.
Once the Office of National Statistics work out the numbers since March 20, the most recent numbers will raise again.
Yesterday, the Department of Health reported 1,408 Covid-19 deaths in the UK - a rise of 180 from the previous day.
It marked the first time the daily increase in deaths has fallen for two consecutive days - suggesting drastic lockdown measures may be working.
At least four of those who died had no pre-existing medical conditions, the Department of Health said.
London remains the highest coronavirus hotspot with 122 of today's deaths in England happening in the capital.
But startling new figures revealed today how Sheffield and Slough are close behind.
Sheffield has recorded 59 cases per 100,000 people - just behind the 64 cases per 100,000 in the capital.
Meanwhile Slough, Berkshire, has recorded 49 cases per 100,000.
It is unclear exactly why Slough and Sheffield have been so badly hit by the virus.
Top Stories