An overzealous Nigerian soldier has killed a man in Delta state as the lockdown continues. 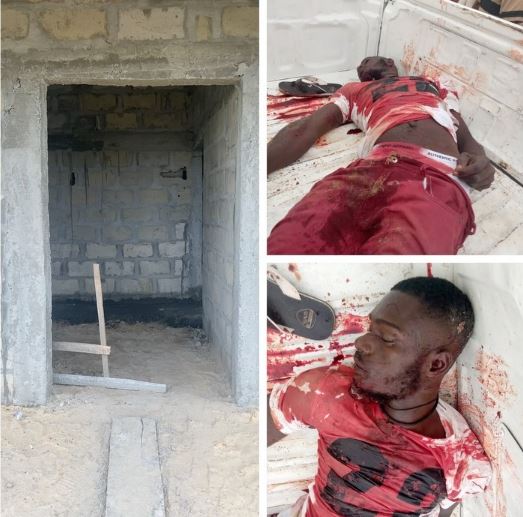 The victim killed by a soldier
A yet-to-be identified soldier has allegedly shot dead a young man, identified as Joseph Pessu and a father of two, along the Ugbuwangue axis of the NPA Expressway, Warri, Delta state.
It was gathered that the tragic incident happened at about 9:40am on Thursday, while the victim was riding his power bike.
Also, Nigerian comedian, Mr. Jollof took to his social media page to share photos of the dead man.
TheNation reported that the deceased was flagged down by a team of the security operatives, who gave a hot chase, when he refused to stop for proper identification.
Vexed by his action, one of the officers was said to have aimed and shot him dead.
The victim, pictured wearing a white shirt and red trousers, drenched in blood, was reportedly taken to the Police Area Command, Warri as sympathizers flocked the scene.
Sources around the scene of the incident said that he was chased to the scene of the tragic incident, with gunshots to the bike’s tyres.
“An army officer just shot one man in Ugbuwangue. He was riding a power bike and they tried to stop him, but he refused. One of the soldiers shot him. He died instantly,” a source told The Nation.
Recall that the Delta State Government had declared a lockdown across the state for 14 days, which started on Wednesday. 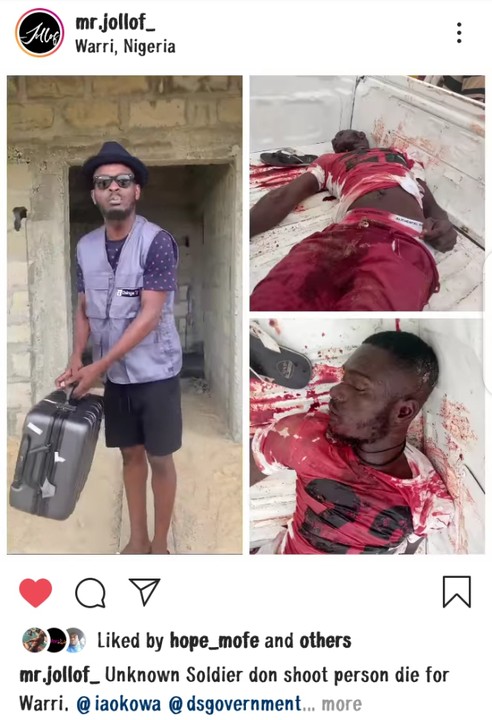 However, only those on essential duties are exempted from the directive, as stated by Governor Ifeanyi Okowa, who warned that security operatives will be deployed across the state to enforce the directive.
Meanwhile, youths of the area were said to have taken to the streets and the expressway in protest of the death.
But the chairman of Warri South council area, Dr. Michael Tidi, alongside a political leader in the locality, Chief Vincent Okudolor, who visited the area, called for calm.
State Commissioner of Police, Hafiz Inuwa, confirmed the development, adding that the timely intervention of the Warri Area Commander, doused the brewing tension in the area.
“If not for the Area Commander Warri, some people would have protested. He quickly moved in and doused the brewing tension,” Inuwa said.
Efforts to get the sector 1 Commander, Operation Delta Safe (OPDS), Colonel Many Garba, to comment on the issue, were unsuccessful as at the time of filing this report.
Watch video below:
Top Stories