The incident took place in Akaeze community in the Ivo Local Government Area of Ebonyi State, on Tuesday. 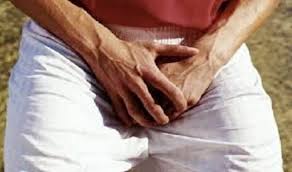 A middle aged woman, who was simply identified as Chinenye Okoro, allegedly killed her lover, Ifeanyi Okoro, by pulling his penis till he died, The PUNCH reports.

The incident, The PUNCH gathered, took place in Akaeze community in the Ivo Local Government Area of Ebonyi State, on Tuesday.

It was gathered that though the deceased and the suspect were lovers, they were always at loggerheads and often threatened each other’s life.

It was learnt that the deceased’s lifeless body was found on the floor in front of his door post by a villager, after the suspect allegedly killed him, by pulling his genitals, which led to his instant death.

The Ebonyi State Police Command confirmed the incident on Thursday.

The Police Public  Relations Officer in the state, Mrs Loveth Odah, said, “On 31/03/2020, at about 11am, one Rose John ‘f’ in company with one Sunday Ngwoke ‘m’ reported at Ivo Police Division that while she was frying garri in her kitchen, she saw one Chinenye Okoro run across her compound and jumped the fence, which got her attention.

“That she decided to find out what happened in the neighbouring compound, only to see the lifeless body of one Ifeanyi Okoro (aka Nwaogbi), lying on the ground in front of his door post.

“Following the report, police detectives quickly mobilised to the scene, rushed the victim to Marthama Hospital, Akaeze, Ivo LGA for medical treatment and he was confirmed dead by a medical practitioner on duty. The body was deposited at Izunna Mortuary Services Ltd, for preservation and autopsy.

“Investigations revealed that the deceased was a boyfriend to Chinenye Okoro and that the two lovers had misunderstanding and as a result, the girlfriend (Chinenye) pulled the deceased’s penis, which allegedly led to his death.”

She said the suspect fled the scene after committing the crime.

“However, effort is on to arrest the principal suspect and the case is under investigation after which suspect(s) would be charged to court for prosecution,” she added.