Ohaneze Ndigbo has continued its criticism against IPOB leader, Nnamdi Kanu faulting him on claims that Buhari was cloned. 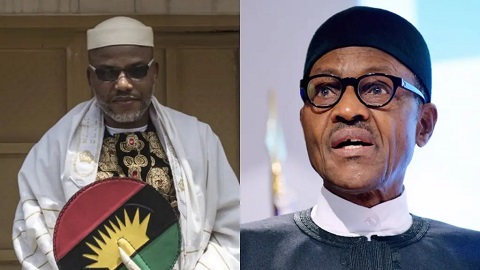 Nnamdi Kanu and Muhammadu Buhari
The apex Igbo socio-political organization, Ohaneze Ndigbo, on Tuesday said that claims by Nnamdi Kanu, leader of the Indigenous People of Biafra, IPOB, that Buhari was cloned is a lie.
The group called the claim rubbish and senseless.
Ohanaeze’s Secretary General, Barr. Uche Okwukwu said speaking with Daily Post, said Kanu’s claim that Buhari is fake was rubbish and a senseless allegation which should be discarded.
The IPOB leader keeps alleging that Buhari was dead and replaced by a Sudanese.
Kanu claims that the person allegedly fronting as Nigerian president is a foreigner wearing a mask that looks like Buhari.
However, Okwukwu, in a chat with DAILY POST maintained that the IPOB leader was putting the Southeast in trouble with his conspiracy theories.
According to Okwukwu: “When a man has no mandate to speak for the people, you ignore him when he is doing something that is unreasonable and illogical, you ignore him. So having said this three things, Kanu is saying something that is unreasonable and illogical. He has no mandate from anybody to speak for Igbo people, and he can’t prove what he’s saying, so there is no need to make him popular by re-arresting him.
“As Marshal Harry’s lawyer, I met with Buhari in Kaduna in 2005 where I spent three days. Also, I met Buhari last year in Aba and when they mentioned my name as the Secretary of Ohanaeze Ndigbo, he recollected that I met with him in 2005. I’m talking about 14 years ago, and he recollected. When I met with him in Aso Rock and presented the case of Igbos that had re-endorsed him, he recollected that I met with him in Aba.
“Can a man who is cloned recollect something? So Nnamdi Kanu is talking absolute rubbish, and he’s senseless and useless. He is putting the Igbos into more trouble.”
Top Stories