A man who lost his wife and two children in a horrific fire incident in Bauchi state has told his story. 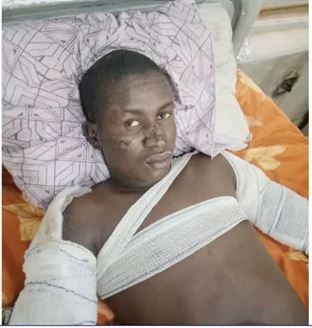 Umar Tukur recently lost his 26-year-old housewife and two children in a fire incident in their home in Sabon Gida, Yelwa, a suburb of Bauchi metropolis in Bauchi State. He tells ARMSTRONG BAKAM what happened from his hospital bed

You lost your wife and two children in a fire incident in your house, how did it happen?

I returned from work that fateful day in the night and because there was a blackout, I decided to put on my generator. But before I powered it, I had to refill it with petrol. While I was doing that, I noticed that the fuel was spilling on the ground. So I put the jerrycan of fuel on the ground so I could look for a funnel to use. The fuel flowed to our kitchen where my first wife was cooking. Suddenly, the fire ignited the petrol fumes. The fire started when I was going to look for the funnel, so I ran out of the place. But I was able to throw the jerrycan with the fuel away.

I didn’t know my first son was close to me and he too ran. My second wife, who was inside, ran out of her apartment but realised she had left the other baby inside, so she ran back inside to get her. I didn’t know my son followed my wife inside. Where the fire started was close to my second wife’s apartment. So, she was trapped inside the house with the two children and by the time she tried to come out, fire had engulfed everywhere and she couldn’t make it.

What kind of woman was she?

I had no problem with her. She was a patient person and a great woman. I married her about five years ago and I had a wonderful time with her before her death. God blessed us with two children through her – a boy and a girl. My first son is three years old and the girl is about 11 months old.

When the fire started, what efforts did you make to rescue your family?

I made efforts to rescue my family and that is why I sustained injuries. The fire caught my shirt and I quickly removed and threw it away, then I tried to call for help. But unfortunately, most of the people around my house had gone to the mosque to pray. It happened around 8pm. I went out of the house and shouted to draw people’s attention to what was going on. Then I ran back inside and was able to rescue my first wife, her newborn baby and one woman with her in her apartment. I was able to get out. And thank God, nothing happened to them.

People rushed to my house to offer help but they couldn’t get into the other apartment where my second wife and two children were because the fire had spread at that time. I have a niece who was there in the house and was burnt, but she didn’t die. She is currently receiving treatment. She suffered burns to her face and leg.

People who came to help could not offer any help because the fire involved fuel and the fear was for it not to affect other houses around. Thank God, it didn’t.

What was going through your mind at that time?

I couldn’t think of anything.

Didn’t you or people around call the fire service?

Someone called the fire service and when they came, they went into the other apartment and removed my first wife and children.

Didn’t anyone try to go inside the house while it was burning in order to rescue your family?

Yes, someone did go inside and he brought them out but at that time, they had been severely burnt. He sustained injuries to his body and had to be admitted at the emergency unit of the hospital for about three days. When they brought them out, I asked the people there to take me to a private hospital in old GRA, but when we got there, they refused to accept us. We had to be taken to Abubakar Tafawa Balewa Teaching Hospital.