Lockdown: Woman In Tears After Her Shop Was Vandalised In Lagos (Photos)


A woman is currently in pains after her shop was allegedly vandalised by robbers amid lockdown. 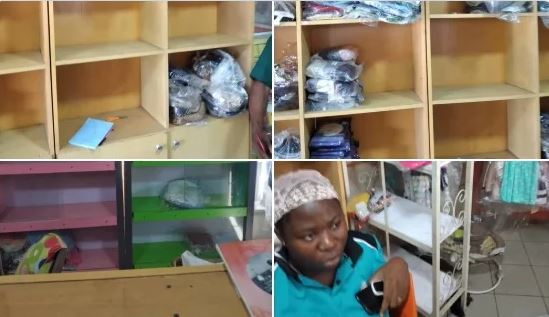 Woman In Tears After Her Shop Was Vandalised In Lagos

A woman has been left screaming and in tears after her shop was vandalised and 85% of her goods were carted away in Surulere area of Lagos state.

With the currently lockdown imposed by the Federal government in Lagos to help prevent the spread of coronavirus, many have taken it as an opportunity to rob and commit several other crimes.

According to reports, the woman was unable to visit or open her shop throughout the period of the lockdown, only to be called by neighbours that her shop had been vandalised and her goods gone.

Social media user, Timidayo Daniel Adebowale shared the story of his aunty on his page, he wrote;

I recieved a call 30mins ago from my aunty crying and screaming about her shop been vandalized and 85% of her market gone..

She said she has not been coming to shop since due to the lockdown. And so she got called up this morning that her shop has been broken

She went to report to police station 2 shops away from hers. Buh she said the D.P.O told her that “They can’t be everywhere”

According to her The D.P.O came this inspect her shop this morning after the robbery buh they said “There is nothing they can do”

This is so sad that her friend is the real owner of the shop but handed it over to her to oversee before travelling abroad.

I’m pained because this police station is just 2shops away from my aunt’s shop. And I’m sure they are aware of the robbery happening at Prime