A Nigerian lady took to Twitter to recount her experience with an uncle who thought she was going to award him her virginity because he waited for her to be of age. 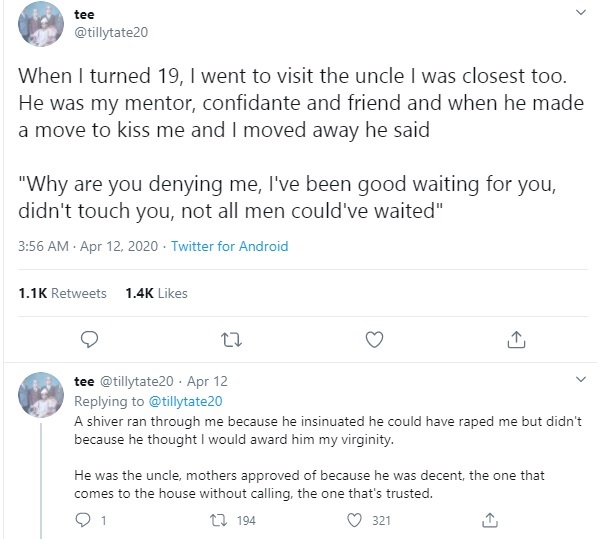 A Nigerian lady has narrated her near sexual-abuse experience with an 'Uncle' she described as her mentor, confidante and friend.

According to @tillytate20, this Uncle thought she will 'award him her virginity' because he was the "kind of uncles mothers approved of."

The Twitter user who revealed that she stopped visiting and calling the man after he demanded for sex after she turned 19, said he nearly cried and went berserk when she told him she has already had sex.

When I turned 19, I went to visit the uncle I was closest too. He was my mentor, confidante and friend and when he made a move to kiss me and I moved away he said "Why are you denying me, I've been good waiting for you, didn't touch you, not all men could've waited"

A shiver ran through me because he insinuated he could have raped me but didn't because he thought I would award him my virginity. He was the uncle, mothers approved of because he was decent, the one that comes to the house without calling, the one that's trusted.

That was the last day I called him uncle or visited him and when I told him I've already had sex, he went berserk, nearly cried. It was so funny to watch. That was the day I said NO to male mentors, that was the day I started asking men around me"what do you want?" 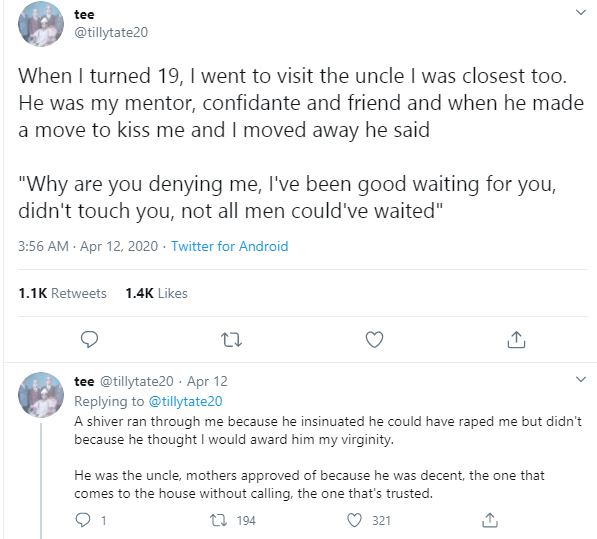