Coronavirus vs Hunger Virus: Lagosians Will Soon Choose Their Poison


Enengedi explains why people may may soon reject the stay-at-home order, choosing to be killed by the virus than to be left to starve to death. 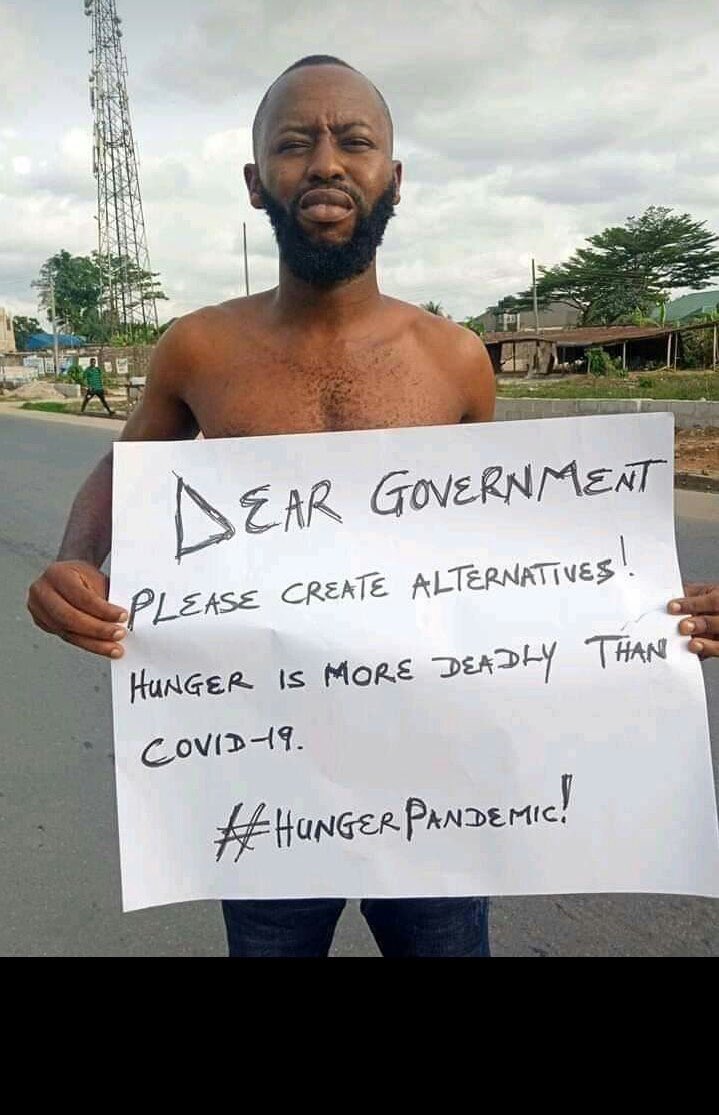 A few days ago, foremost Nigerian television station, Africa Independent Television (AIT) reported the story of a Taxi driver Abuja who after being arrested by the Federal Road Safety Corps for violating the lockdown suddenly stripped completely naked to protest his arrest and impound of his car. The Man insisted he was hungry and needed to go out to work for money so he can feed his family. When queried by the AIT reporter whether he was not afraid of the Coronavirus, the man replied, “We no fear coronavirus. Hunger virus pass coronavirus.”

This is the sentiments that a growing number of Nigerians are beginning to feel as they begin to become uneasy with the compulsory sit-at-home imposed by the government.

When President Muhammadu Buhari on Sunday, March 29, announced in a live television broadcast that some States were going to be under a lockdown, many residents of the state didn’t envisage that it was going to be a total restriction of movement of people, goods and services, given the fact that the measure was new to Nigerians. Many had assumed that the lockdown was not going to be any different from the times when normal life usually returned after a few hours of restriction of movement during elections and monthly environmental sanitations.

Apart from Lagos, Osun and Abuja that are under federal lockdown since it emerged that they have the highest number of confirmed cases of the virus combined, some other states have also imposed lockdowns. With the lockdown, travel to and fro other states have been suspended. Schools, businesses, offices, churches and mosques have all temporarily shut down. The only places exempted in the order are hospitals and stores selling essential items such as groceries and medicine. While a Presidential Task Force on COVID-19 was constituted to enforce the lockdown, Police and Army have been deployed to various parts of the affected states to ensure a strict observance to the state at home order.

According to the government, the lockdown was necessary to contain the virus from spreading rapidly. Yesterday, the President further extended the lockdown by another two weeks, but it cannot be fully estimated how well the lockdown has helped in the containment of the virus.

Even as the virus spreads at an alarming rate, there are still some people who do not believe in its existence. A poll conducted by Vanguard Newspaper on Twitter and Facebook to hear readers’ opinion on the existence of the coronavirus showed a significant percentage of people doubting the presence of a virus. In the “Yes and No” poll asking the question, “COVID-19: Do you believe coronavirus is in Nigeria?“, of the 18, 789 response, 6,202 (33 per cent; 33%) of the responders were of the opinion that there is nothing like COVID-19 in Nigeria, while 12,596 (67 per cent; 67%) opined the disease indeed exists and in Nigeria.

Sadly, a neighbour of mine, Mr Ayo shares this sentiment as well. Ayo is an advocate of the Coronavirus-5G conspiracy theory being propagated in some quarters. “There’s nothing like Coronavirus. They are trying to trap everyone inside their houses so that they can easily install their evil 5G masts,” Ayo claims.

Taking a look at my neighbourhood in Okota, Lagos, there has been a total shut down of activities. Iya Sekinat who owns a food canteen by the road has been unable to open shop since the lockdown and has thereby not been able to raise money. “For two weeks now, I have not opened my shop. My business is suffering and so is my family, because we all feed from the money I make from my food business,” Iya Sekinat lamented.

As at the third week, many people are already getting uneasy with the mandatory sit-at-home. Notably, many could not understand why they have to sit at home when they barely have enough money to feed themselves and their families. A commercial bus driver in Lagos told me how he manages to come out in the early hours of the morning to go on a few trips just to at least make a little money to feed his family just before the enforcement officers resume. “I come out in the morning by 5am and go on two or three trips before day breaks. I’m not a salary earner. I survive by driving a bus. Imagine if I have to stop driving for a week, how do I survive?” Babatunde said.

Unfortunately, no one saw this leading to a lockdown. Many Nigerians who are majorly daily income earners feel they have been deprived of their livelihood. Sticking to confinement seems to be extremely difficult for a people who in the majority depend on daily wage to survive. The restriction of movement has cut many people who live hand-to-mouth in the city off from their only source of survival. The little that they had has been spent primarily on food and essential commodities. For daily wage earners, saving money is almost impossible. “How do you save when what you earn is not even enough for you in the first place?” Kayode, a mechanic asks. “If someone calls me for a job right now, I wouldn’t care about the Coronavirus at all. I care more about the hunger that will persist if I don’t go out.”

The lockdown has however triggered the rise of food prices in the markets. In the wake of the lockdown, prices of goods in the market quickly shot up forcing consumers to buy items at exorbitant rates. “I went to the market the other day to try to buy some food items to stock up for the lockdown, but I was in shock to find out that the prices have almost tripled,” an angry Mrs Okafor lamented.

While announcing the lockdown, the President had promised palliative measures to help cushion the effects on the citizens. The measures were to come in the form of conditional cash transfer and distribution of relief materials. Sadly, only a minute few have benefitted following the slow pace of distribution and the government’s faulty plan to reach only the “poorest and most vulnerable in the society”

Apart from providing relief materials to the citizens, other measures like full-time electricity would have made life a little bit bearable, even if consumers have to pay for it like they normally do. A Lagos resident, Bayo Adebiyi says he has become frustrated with the epileptic power supply and references what the Ghanaian government has reportedly done for its people. “I heard that in Ghana, the government is undertaking the electricity bill of the citizens for the duration just to make the people happy. Isn’t that the type of thing our government should emulate before forcing people to sacrifice their livelihood?,” Adebiyi said.

With the low rate of economic activity, not even people working white-collar jobs are guaranteed their full salaries during this lockdown. How many firms and companies have the luxury to pay workers when little no work was done in the duration? If any will do so for the first month, will they be able to continue to do so if the lockdown persists, considering the downward slide of the country’s economy?

One thing for sure is that people are hungry and getting angrier by the day as they are being forced to put a brake on their lives at the expense of starving to death. A viral video on the internet showed the aftermath of an attack on a vehicle carrying food-stuffs. According to the commentary on the video, hoodlums attacked the vehicle, smashing the windows and carting away tubers of yams, baskets of tomatoes and other food items. Also, in the last one week, the rate of armed robbery has shut up in both Lagos and Ogun States, commencing what may turn out to be a slow move towards violent revolts. The robberies started in Ogun and then spiralled to Lagos, who knows what locations will be next?

As at the time of writing this piece, Nigeria currently has 343 confirmed cases of the Coronavirus with Lagos making up for about 54%. Unfortunately, 10 persons have died, but the figure will not be compared to the number of people who may die from hunger in the coming weeks if not provided for. There’s not yet a confirmed cure or vaccine for the Coronavirus, but the 'hunger virus' has a cure – and that is food. Without it, Soon, people will no longer be able to endure and they will revolt and reject the stay-at-home order, choosing to be killed by the virus than be confined to their homes and be left to starve to death in frustration and depression.