An undergraduate student of Federal Polytechnic, Ado-Ekiti has blamed the devil for leading him astray. 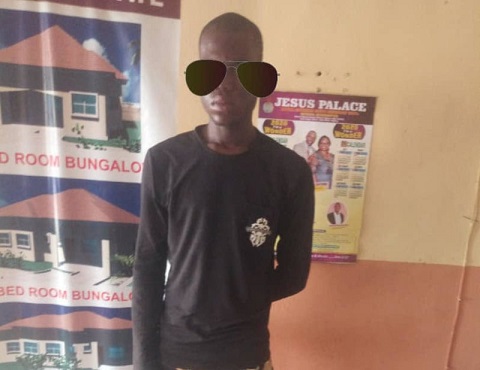 Femi Adejuwon
Femi Adejuwon, a student of the Federal Polytechnic, Ado-Ekiti, Ekiti State has confessed after raping a 16-year-old student in the state.
The suspect however, blamed Satan for his action. He has been arrested by operatives of the Ondo State Command of the Nigeria Security and Civil Defence Corps.
The state Commandant of the NSCDC, Mr Philip Ayuba, disclosed that the suspect raped the student after he asked her to meet him at his friend’s place.
He said: “Information reaching us from concerned citizens in the Ijoka area of Akure on Sunday, April 12, 2020, was that a 16-year-old girl, who is currently seeking admission into a higher institution, was allegedly raped by one Femi Adejuwon, an undergraduate of the Accountancy Department of the Federal Polytechnic, Ado-Ekiti.
“During investigation, the victim narrated her ordeal in the hands of the suspect after being discharged from the Police Clinic, Akure.
“She said the suspect called her on the telephone to meet him in his friend’s place. On getting there, Femi Adejuwon took her in, shut the door and violated her. She was later rescued in a pool of her own blood.”
The NSCDC boss noted that the suspect had confessed to the crime. He pleaded for mercy, regretting his crime and promised to turn over a new leaf. He said that he was pushed to commit the crime by the devil and had regretted his action.
Ayuba said the suspect would be charged as soon as investigation was completed.
Top Stories