Busted! See The Gang Leader Who Lives Large, Changes Cars At Will By Stealing Bags Of Rice


The father of three and his brother were arrested by operatives of the Inspector-General of Police Intelligence Response Team. 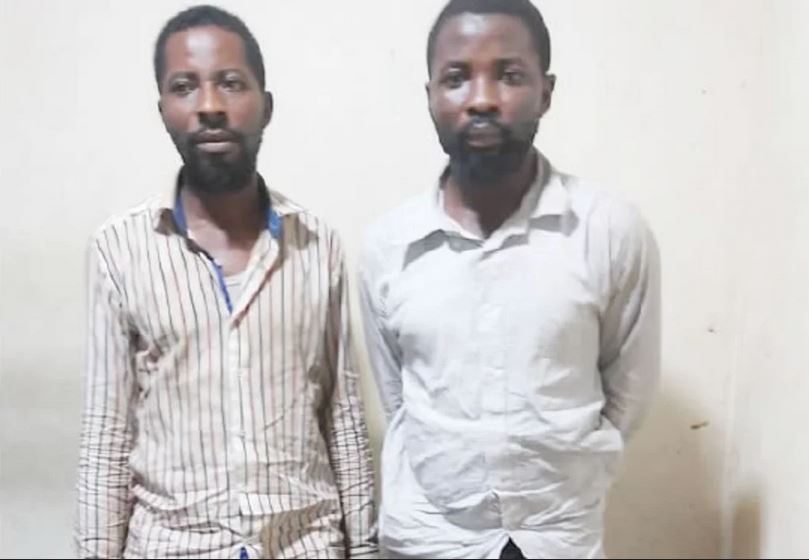 According to Saturday PUNCH, Yinusa Saheed is a big man at Okolowo, a serene community in the suburbs of Ilorin, the Kwara State capital. With a house of his own and cars he replaces at intervals, the 32-year-old is a known face in the neighbourhood. No one knew he made money inflicting pains on shop owners in the state until luck ran out on him recently.

The father of three and his brother, Yinusa Morufu, 38, were arrested by operatives of the Inspector-General of Police Intelligence Response Team for looting shops in Offa and Ilorin areas of the state and stealing several bags of rice.

City Round learnt that the siblings are members of a syndicate that specialised in burglary and caused untold hardship for traders selling foodstuffs in large quantities.

It was gathered that Saheed formed the gang in 2017 after buying a Toyota Matrix, which he used in conveying stolen bags of rice to his customers at different parts of the state and sold to them at discounted rate.

Morufu reportedly joined the gang few months ago and participated in two successful operations before he was apprehended.

Our correspondent learnt that IRT operatives led by DCP Abba Kyari went after the gang after the Inspector-General of Police, Adamu Mohammed, received several petitions on burglary in the two towns.

After weeks of searching, the detectives made a breakthrough when they got intelligence that a vehicle containing 11 bags of rice was abandoned by some thieves, who fled into the bush when accosted by policemen.

“Based on this information, a crack team was deployed in Kwara State and they traced the owner of the vehicle who happened to be Morufu. He confessed during interrogation that he is a member of the gang and was the person who abandoned the operation vehicle.

“He also revealed that his younger brother is the leader of the gang involved in the heist. Based on this information, the IRT operatives swiftly launched a manhunt for Saheed and he was arrested,” a police source told our correspondent.

While being paraded by the police, Saheed said he started off as a cab driver but took to stealing bags of rice as fast means of making big money.

He recalled, “I am married with three kids and live at Okolowo area of Ilorin. It is a new site and I am well known in that area because I am a big man. Morufu is my elder brother and we are about seven children from the same mother.

“Shortly after I finished secondary school, we relocated to Kano State with our parents. There was no money to continue my education, so I decided to learn printing job. When Boko Haram attacks started, our parents returned to Kwara and I followed them.

“My mother sells food at Offa Garage. She supported me with some money and I bought a golf car which I was using for commercial transport. Some months after, I had an accident and the car was destroyed.

“I sold it as scrap and added some money to buy a Toyota Matrix. One day, I met a man and he told me that I was wasting my time in transport business. He taught me how to break into shops.’’

Disclosing the gang’s mode of operation, Saheed explained they would visit the shops during day on the pretext that they were potential customers and assessed the quantity of foodstuffs available therein. At night, they would return to the target shop and break into it.

He said he used the proceeds of crime to buy cars, build a house and send his children to good private schools.

Saheed stated, “On my first operation, we got 15 bags of rice. I started in 2017 and have lost count of the number of bags I have stolen from shops, but I know that it is more than 1,000 bags of rice. We have several customers in Ilorin. They thought we bought the rice in large quantity. A bag of rice is N15, 000 but we normally sold it for N14, 000.

“When my brother finally returned from Kano, he was broke. He became a burden to me. He always borrowed money from me and my mother. I had no choice but to open up to him and let him know how I was making my money.

“Initially he was angry and threatened to tell our mother. I was not worried because my mother would not hurt me even if she knew. The next day, he came back and told me that he wanted to join us. It was the proceeds from the stolen rice that I used in sending my children to good private schools in Ilorin.

“I was also able to build a bungalow where I live with my family. I made much money and was changing cars. I normally used my personal car to carry the rice. As soon as it started having faults, I would buy a new car. I am begging government to forgive me and let me go. I don’t want to contract coronavirus in prison.”

Saheed explained further that he was once arrested and charged but granted bail, adding that he continued with the crime because it was the only way he knew to make money.

“My wife and children were not aware that I am a thief. My family thought I was framed the first time I was arrested. I never went home with a bag of rice. I only go home with smaller bags,” he added.

In his account, Morufu said he was an auto mechanic and borehole driller but he took to crime after he relocated to Kwara from Kano due to Boko Haram insurgency.

He said, “After I finished secondary school, I learnt how to repair cars till 2001 when my parents relocated to Kano State. While in Kano, I discovered that mechanic work was not moving well. I then ventured into borehole drilling.

“I learnt the job from my elder’s sister’s husband who is a government contractor and I was making close to N400, 000 monthly. I got married later and started my own family, but unfortunately, the Boko Haram insurgency got to Kano and my parent returned to Kwara State.

“I stayed back but stopped getting jobs because people were no longer requesting my service due to the tension in the land. Things became difficult for me and in 2018, I returned to Kwara State where I joined my younger brother, Saheed in looting shops.

“We started using my car as our operational vehicle. On our first operation we stole five bags of Nigerian rice and we sold them at the rate of N15, 000 each to a woman in Ilorin and I got N30, 000 as my share.”

Morufu said they stole seven more bags of rice from another shop in Offa on the next operation and sold them to the same woman at the same amount, adding that he got N40, 000 as his share.

He claimed Saheed usually broke into the shops while he assisted in loading the bags of rice into the vehicle.

He added, “On our third operation we broke into a shop in Offa and stole 11 bags of rice, but we ran into some policemen on patrol on our way out of the town. We abandoned the car and ran into the bush.

“I do not take stolen rice to my house because I have conscience. It is wrong to allow my children to eat from that rice. I am sorry I allowed poverty to lead me into stealing.

“I did not feel bad then because I assumed that anyone that owns a big shop must be rich. So stealing few bags from them will never make them poor.”