APC Used Oby Ezekwesili, Rubbished Her, Then Dumped Her Like A Used Pad – Reno Omokri


Reno Omokri took to social media to reveal how Oby Ezekwesili was used, dumped and rubbished by the APC govt. 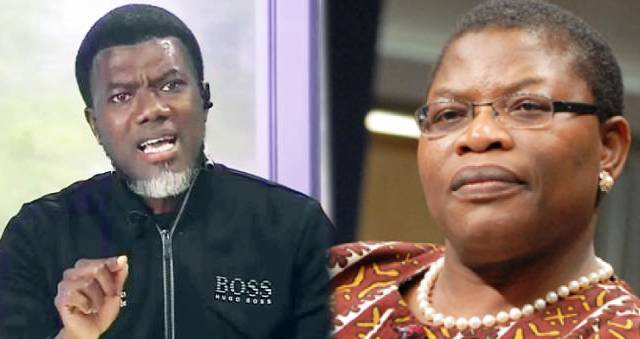 Reno Omokri, on his Medium channel, has written on how the APC used Oby Ezekwesili, rubbished her then dumped her like a used pad.

According to him Oby was used by the APC to attack Jonathan’s administration but didn’t get what she wanted from the party after their election into office.

This he said was what prompted her to run for presidency in 2019.

Do not be fooled. Oby Ezekwesili, for all her religious pretensions, is a self-righteous hypocrite. I know this because I have incontrovertible proof that lays her hypocrisy bare.

Oby is a woman that loves to criticise others, but cannot stand to be criticised. While I was one of President Jonathan’s spokesmen, I watched her criticise my boss using polite and impolite language.

Then one day, I saw her respond to criticism by another person against her, and all hell broke lose. She attacked me like a mother hen whose chickens were under threat and promised to report me to my boss. You can imagine! Reporting me to the very same authority she had been undermining. How rich! Typical Oby.

And then I wrote a parable tweet directed at someone who is now serving in Buhari’s government and called that person a ‘wicked stepmother’. The narcissism of Oby then came to fore. She insisted that she was the one I was referring to (she was not!) and then she savaged me again.

Throughout the time that Dr. Goodluck Jonathan was President of Nigeria and after his tenure, this woman verbally assaulted him, sometimes using the most savage and impolite terms.

I later got informed that her grouse was not really with President Jonathan, but instead with Dr. Mrs. Ngozi Okonjo-Iweala, who she felt had left her behind. That is a tale for another day.

Oby cannot deny that she was used by the All Progressives Congress to undermine the Jonathan administration and rise to power. She and her co-travellers in her Bring Back Our Girls movement were celebrated by the APC itself as “our members”.

On October 15, 2014, a major chieftain of the APC, who later became Minister of Agriculture under the party had said at the Presidential declaration of General Muhammadu Buhari as follows: “We commend the #BringBackOurGirls movement led by members of this party”.

Moreover, on March 6, 2014, Oby Ezekwesili was the keynote speaker at the first-ever All Progressive Congress Economic Summit, an event at which she did not lose the opportunity to savage the person and administration of former President Goodluck Jonathan.

At that time, she had some considerable credibility, which she then used to further the campaign and candidacy of then-candidate Muhammadu Buhari. Oby cannot deny that her public and private utterances and behaviour convinced many of her followers to support the APC in 2015.

And then the APC won the 2015 Presidential election, after which General Buhari was sworn in on May 29, 2015. A year later, he appointed Hadiza Bala Usman, co-founder of Oby Ezekwesili’s Bring Back Our Girls movement as the Managing Director of Nigerian Ports Authority, in keeping with Ogbeh’s proclamation that the BBOG was “led by members of this party”.

I am a researcher and a keen watcher of the APC and its government, and I can tell you that it was not until it became clear to Oby Ezekwesili that she was not going to get any appointment from the administration of General Muhammadu Buhari, that she turned on him and began to criticise his administration.

Oby cannot claim altruism. She wanted a job badly. We know she is over-ambitious. When it was clear she would not get a job, she opted to run for the Presidency in 2019 against her previous benefactor, General Buhari. She refused to step down for a more electable candidate.

Her then running mate, Gani Galadima, said that Oby was never serious about her Presidential run and that ‘Dr. Obiageli ‘Oby’ Ezekwesili only wanted to use the platform of the ACPN to negotiate to be Nigeria’s finance minister.’ His words, not mine.

Now, I urge Nigerians to situate her criticism of the Jonathan administration against these facts and in retrospect, you begin to see Oby for what she truly is.

And this has now been further corroborated by the allegation made against her by Bello El-Rufai, the son of the Kaduna state Governor, who accused her of being a beggar while stating that he has dates and receipts for her beggary.

Even sadder still was the fact that this young man who used to call Oby Ezekwesili as ‘Aunty Oby’ reverently, simply addressed her as Oby! Look how low she has fallen in the esteem of those who used and dumped her. She celebrated the young man when he disrespectfully called the sitting President of Nigeria ‘Ebele’, now she is aghast when he turns on her.

Oby should be aware that a slave who laughs when the man fighting for his emancipation is killed and buried in a shallow grave should expect no sympathy when the same or worse is done to him. What has Bello El-Rufai said to Oby that is not as bad as what he said against former President Jonathan, which Oby Ezekwesili herself tolerated and even celebrated?

I have tweets made by Oby, where she insulted former President Jonathan. She has now deleted some of those tweets. If Oby felt that those tweets were Godly and justified, why did she delete them? (I still have them). Her deletion is evidence that she knew she was out of line. She does not have the moral authority to call Bello El-Rufai out.

I have taken great pains to chart Oby’s celebration by the All Progressives Congress, and her denigration by the same party, so that my readers will see clearly that Oby is not a victim. She is an enabler. A scorned woman. And anything she says going forward about either former President Jonathan, or the incumbent General Muhammadu Buhari, should be seen in that light.

Bello’s mum, Hadiza El-Rufai, is indeed right. Oby almost literally sowed the wind. She is now reaping the whirlwind. No one should intervene. Let Oby reap what she has sown. It will teach other Quislings a lesson. A saboteur is deserving of the treatment she gets from those in whose interest she sabotaged the people.

According to Transparency International (of which Oby Ezekwesili is one of the co-founders), Nigeria is now much more corrupt as a nation than we ever were in 2015 (think Babachir, think Buhari raising up Ganduje’s hands, think of the $25 billion worth of Nigerian National Petroleum Corporation contract awarded without due process, think of Aisha Buhari’s ADC).

Ask yourself this question: If an organisation, co-founded by Oby, has come out with this fact, why is Oby not savaging Muhammadu Buhari in the same way she attacked former President Jonathan? She may be uttering some token noises, but her tone, volume and angst is nothing compared to how she savaged then President Jonathan.

Oby weaponised Chibok against the Jonathan administration. Why did she not do the same with the multiple abductions that have occurred under this administration? I have toured the whole world for the #FreeLeahSharibu campaign, and people have wondered about the lack of interest by Oby in this unfortunate incident.

According to the World Poverty Clock and the World Economic Forum, Nigeria is now the world headquarters for extreme poverty. You can imagine if this occurred under Jonathan. Oby would have screamed out her favourite catchphrase: O-K-O-K-O-B-I-O-K-O! Instead, she is subdued.

Oby reminds me of what Ezeulu said about Nnabenyi in Chinua Achebe’s seminal novel, Arrow of God. Ezeulu described people like Nnabenyi as “rats gnawing away at the sole of a sleeper’s foot, biting and then blowing air on the wound to soothe it, and lull the victim back to sleep”.

Oby gnawed away at then President Jonathan, and when her false criticism has done the damage she expected, she began to use her words to whitewash the Buhari administration, and its kitchen cabinet members, like Malam Nasir El-Rufai, until it became clear to her that they were not willing to trust a snake like her, who used its venom on an innocent man.

Meanwhile, the Ngozi Okonjo-Iweala, that she was so jealous of continues to soar and soar, while the likes of Oby have been exposed as beggars, of whom their receipts have been kept for such a time as this.

I just hope others will learn from Oby and not allow excessive ambition to be their undoing. Look at how she has been reduced. If I had said that about Oby, she would have taken me to town. But she is unusually silent over the beggar accusation. I wonder why?

Finally, let me add that 5 days ago, Oby Ezekwesili gave a Twitter live video in which she claimed that she was offered a ministerial appointment by former President Jonathan, but she turned it down. I spoke to former President Jonathan and asked him about this and this is his response “That is not true! Who spoke with her? Definitely not me”. Oby Ezekwesili is, not surprisingly, a liar!

Everything shines when it is its time, whether the sun, the moon, the stars or a comet. Take yourself for example. You don’t put on your house lights in the day time, because it is not the right time. You too will shine. Your time is coming soon! Therefore, go where life takes you, but don’t break when life shakes you. Dead leaves fall when the wind blows the tree. You are not a DEAD leaf. You are a DEAR leaf. You add life to the tree. You have value. You are an asset, not a liability. Be encouraged!”