The Nigeria Police Force has arrested two officers who were caught in a viral video assaulting a woman at Osun state over alleged breach of lockdown directive. 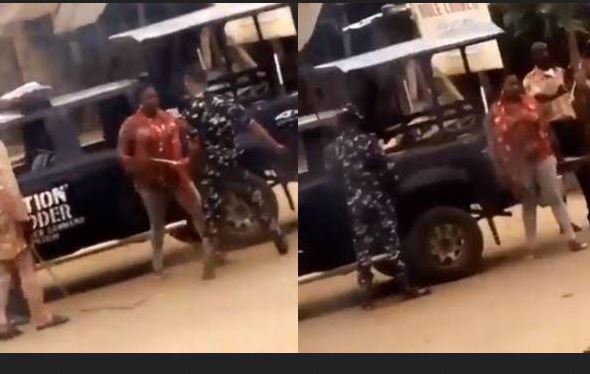 The Osun State Police Command, yesterday, arrested two of its men involved in assaulting a lady at Odo-Ori, in Iwo Local Government Area while enforcing the coronavirus restriction order in the state.

In a statement by the Police Public Relations Officer, Yemisi Opalola stated that the Commissioner of Police, Johnson Kokumo, described the assault on the lady, one Abdulazeez Alimat, as unnecessary, adding that the men are presently under police trial.

Two policemen, Inspector Ikuesan Taiwo with AP/NO. 251724 and PC ABASS Ibrahim with F/NO. 509634, in a viral video were seen assaulting a lady over enforcement of lockdown order in Osun state.

CP Kokumo said: “We have identified, arrest and detain the erring Policemen involved in the unlawful assault. They are: Inspector Ikuesan Taiwo with AP/NO. 251724 and PC ABASS Ibrahim with F/NO. 509634. The defaulters are currently facing force disciplinary procedure of orderly room trial for their unprofessional conduct.”

Meanwhile, the Osun State Government has condemned the action of the officers, saying they went overboard in the discharge of their duties.

In a statement by the Commissioner for Information and Civic Orientation, Funke Egbemode, said: “This is a democracy, and Osun state is a decent society where men in or out of uniform should not and cannot whimsically flog women even men. We note that police authorities have condemned the unwarranted actions of these men. The State Government likewise condemns the unacceptable conduct of these policemen.”

The Inspector General of Police, IGP M.A Adamu, NPM, mni condemns this unwarranted, unnecessary and unjustifiable assault on this innocent citizen (as shown in the attached viral video), at the Odo Ori Market, Iwo Osun State by men of the Force attached to Iwo Division, Osun pic.twitter.com/oNJ3iZdjY9