A Nigerian man has told the story of how his brother committed suicide after alleged inhumane treatment by SARS operatives. 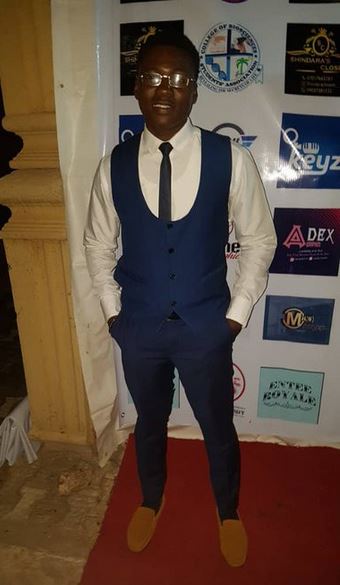 #JusticeForSeyiAkinade is currently trending on Twitter and it was triggered by an alleged inhumane treatment by Special Anti-Robbery Squad (SARS) operatives, which reportedly pushed a young Nigerian forex trader into committing suicide.

@Comeback_Snarky who shared tweets from his younger brother just before he died this morning April 22, said he must have "committed suicide out of depression based on the way SARS officials recently treated him."

The Twitter user's brother was reportedly arrested at Camp Abeokuta and driven to Ibara Police Station where the SARS operatives allegedly accused him of being a fraudster, and also told him he will regain his freedom if he pays N200k.

He tweeted; My younger brother died earlier this morning and I can't help beating myself up for missing the clues he left as to what he was going through. My theory is that he committed suicide out of depression based on the way SARS officials treated him. 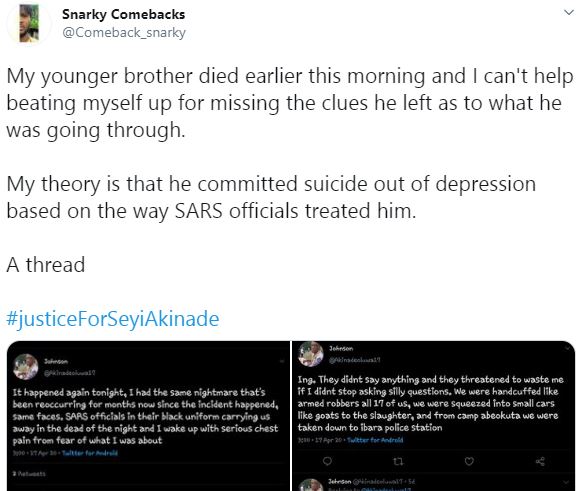 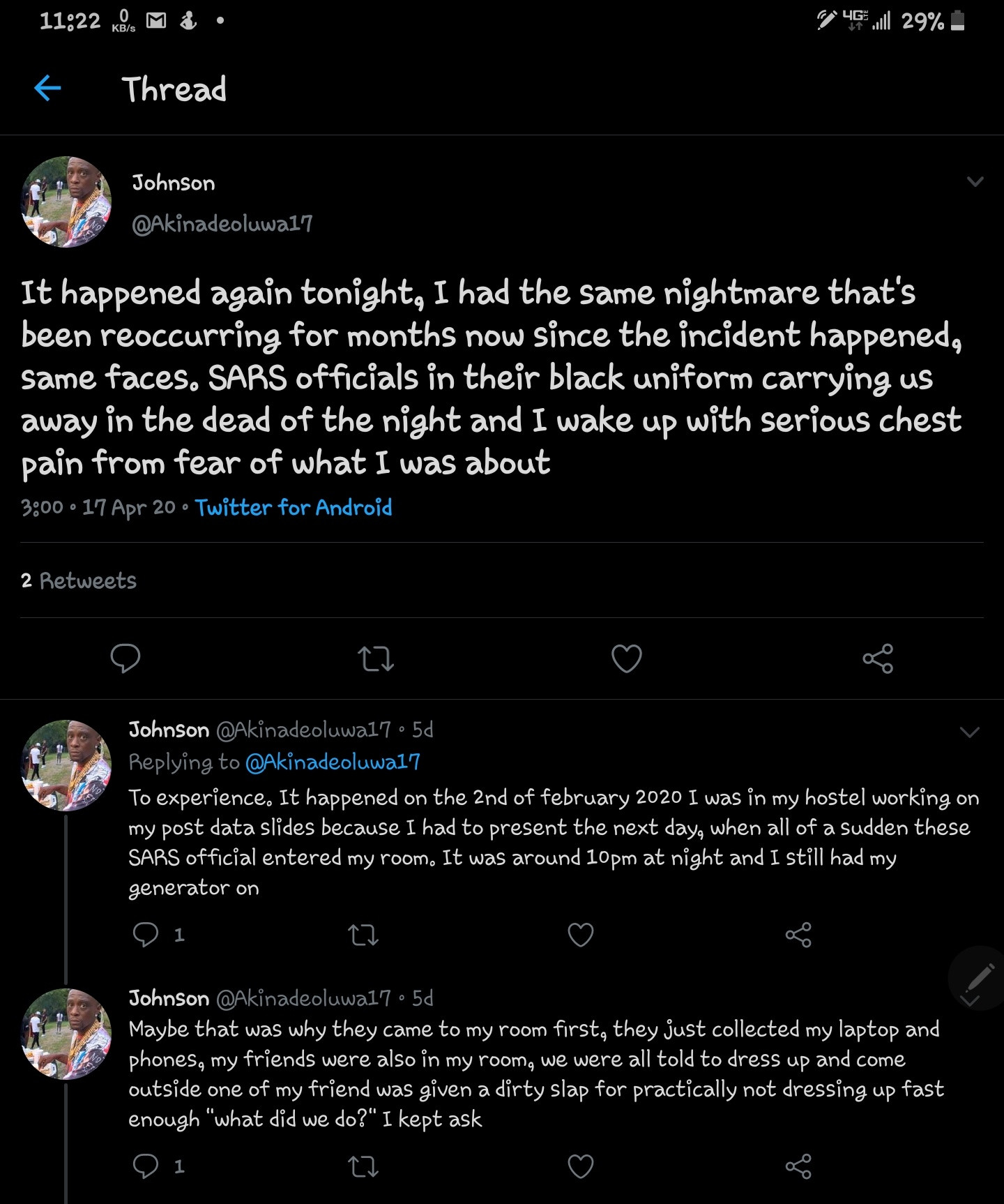 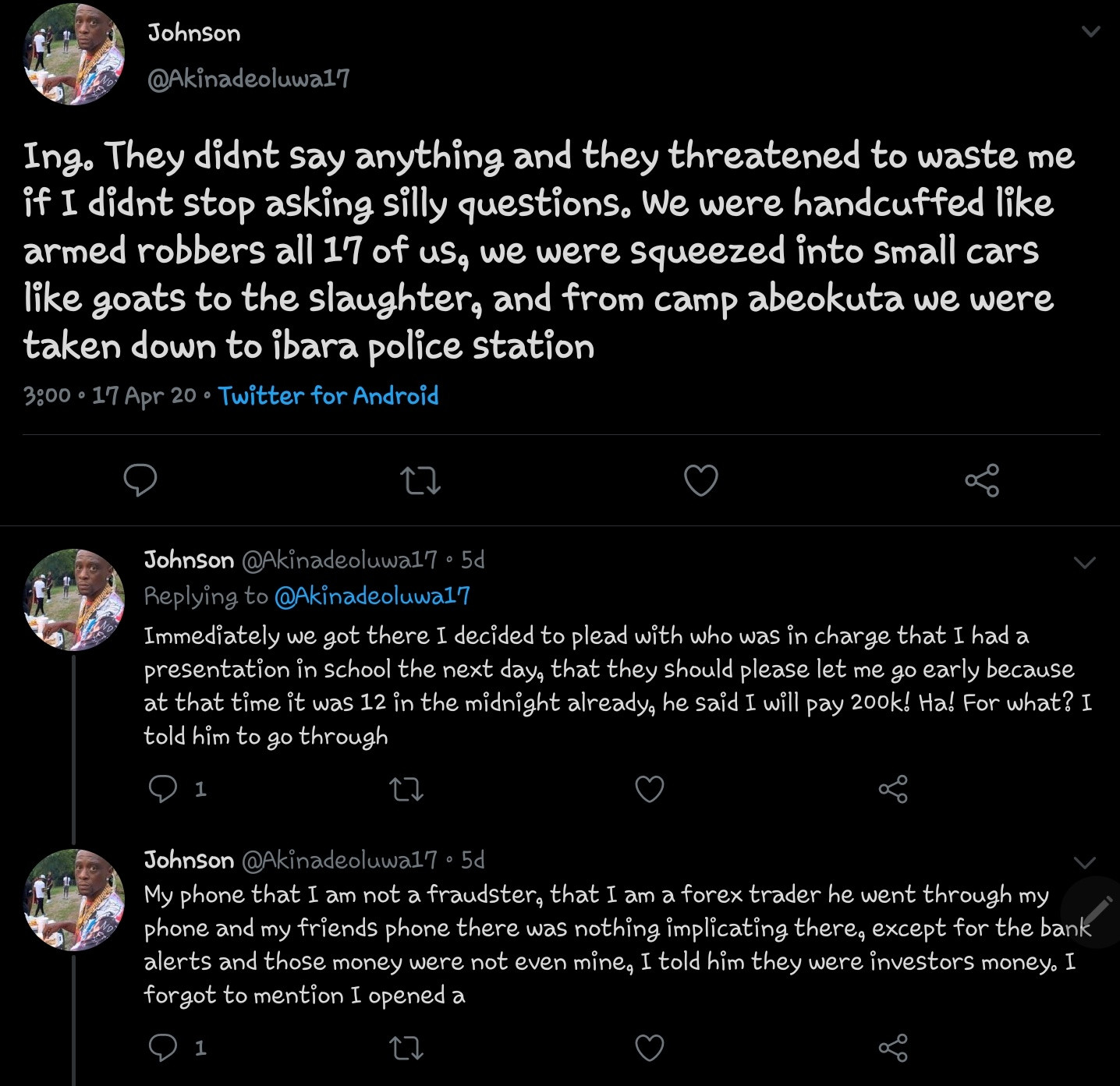 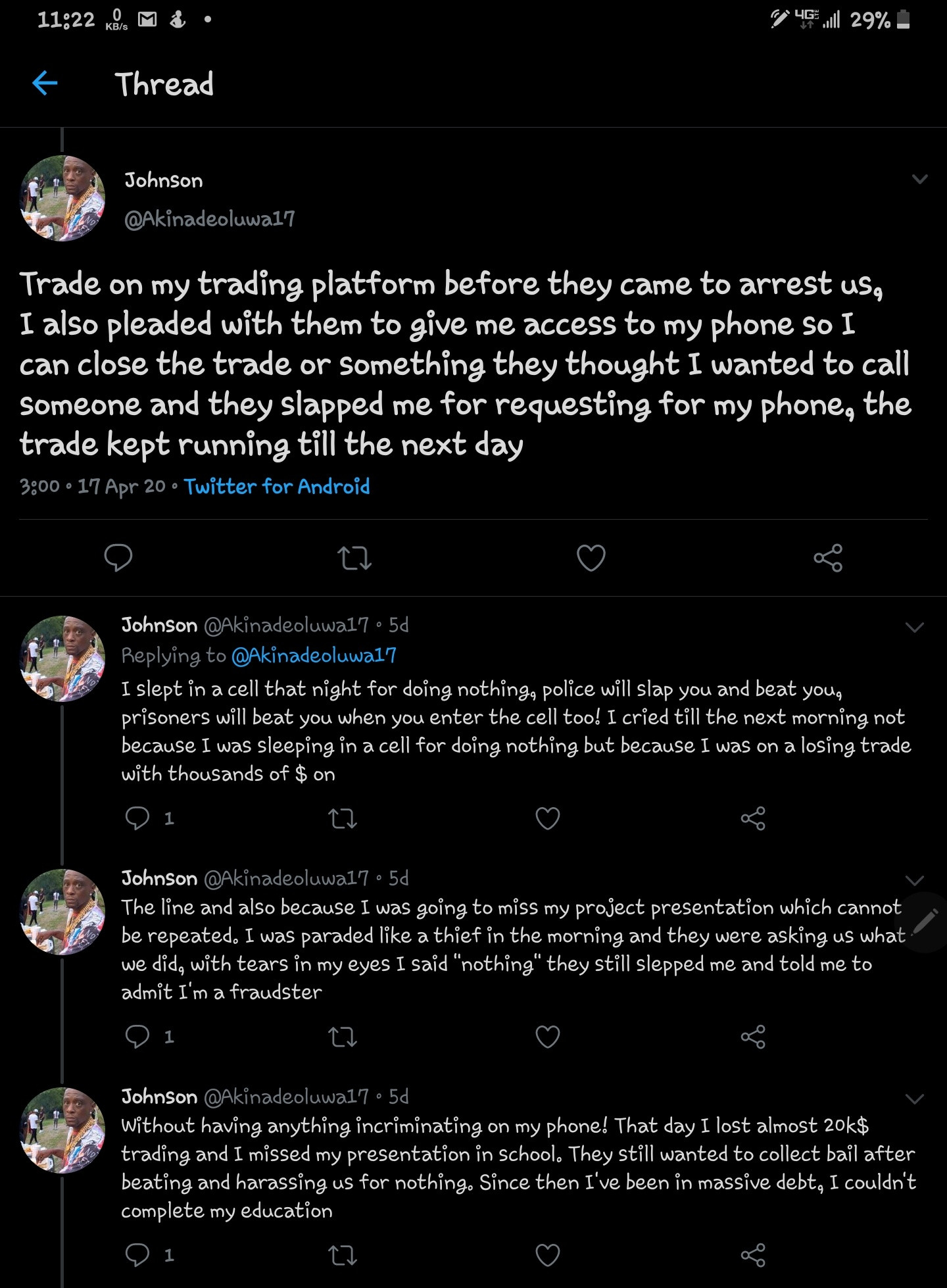 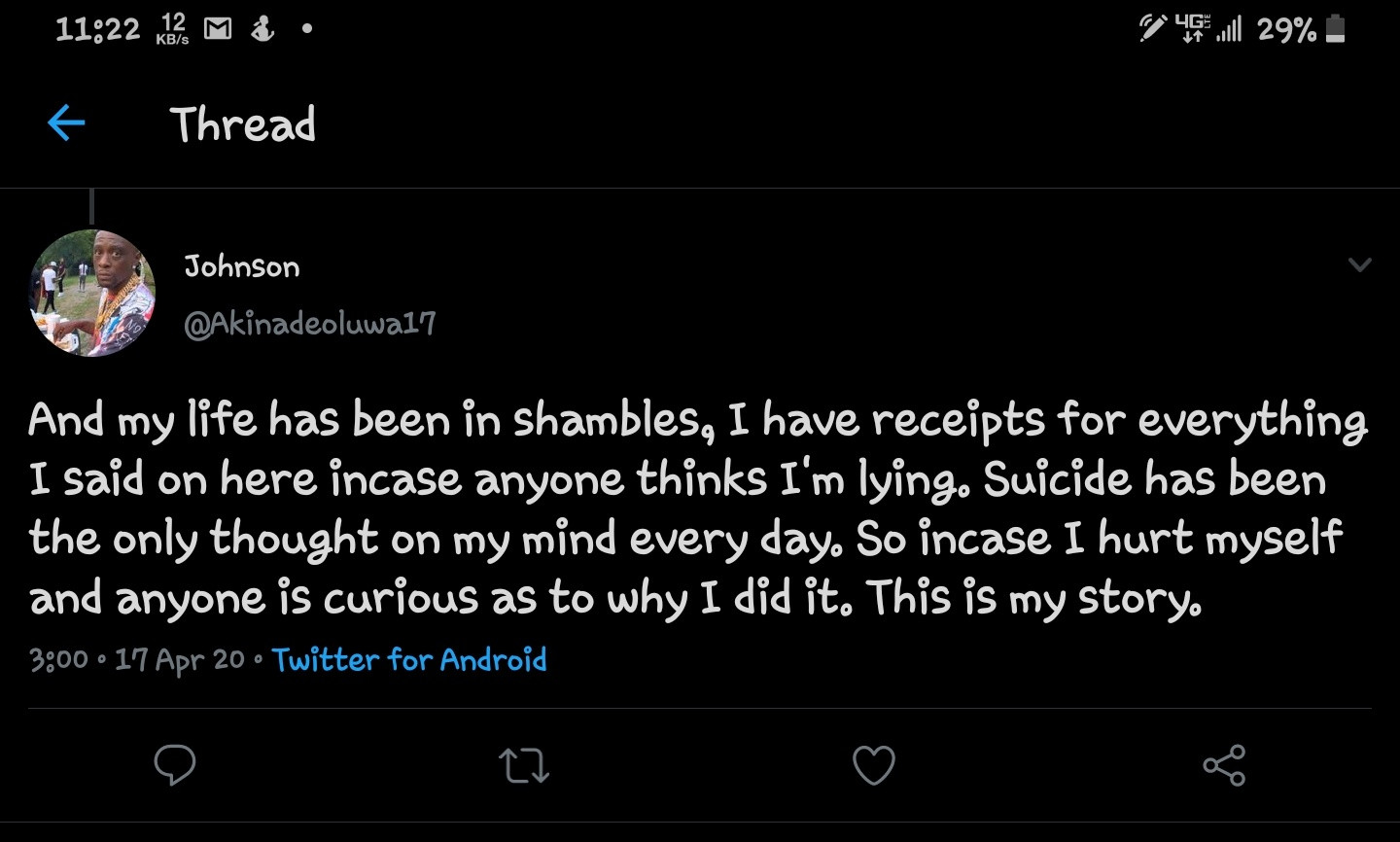 He wrote in another post; His post yesterday morning and Some of the hints he has been leaving on twitter this past week. It's definitely a crime to be Nigerian. Nigeria won't rest until it takes your life!! I don't even know how to feel right now, I just feel empty.

He was learning how to draw from me... Tho he was in school, he ran a forex trading Enterprise. Many people can attest to the fact that seyi is not a Yahoo boy. He did legit, he always wanted to be legit and Nigeria killed him for it. Up Nigeria! You guys have done it again!

Please tag appropriate agencies too Seyi is dead but there are many people contemplating suicide right now. Pick up your phone now, dial that number. One call can save a life 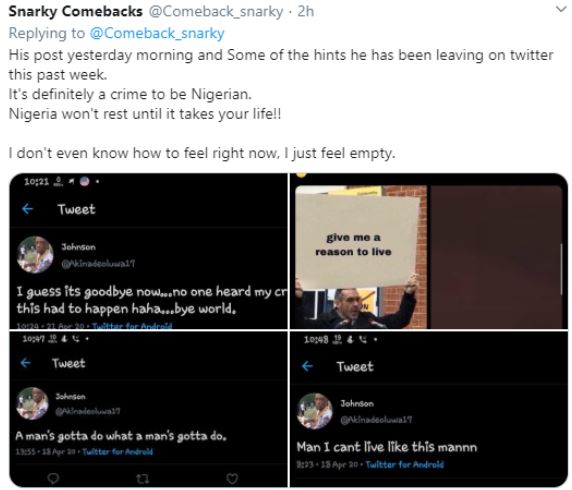 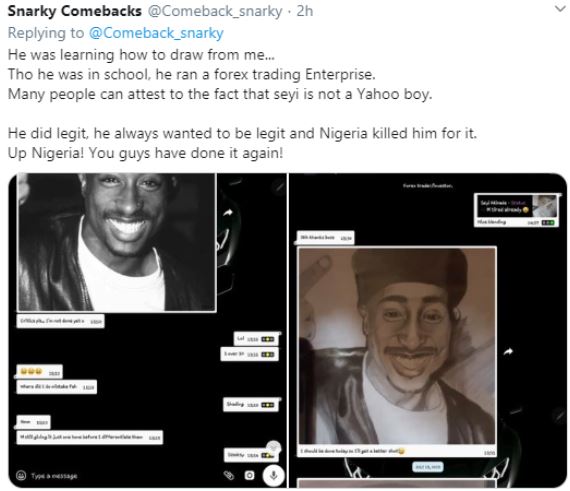 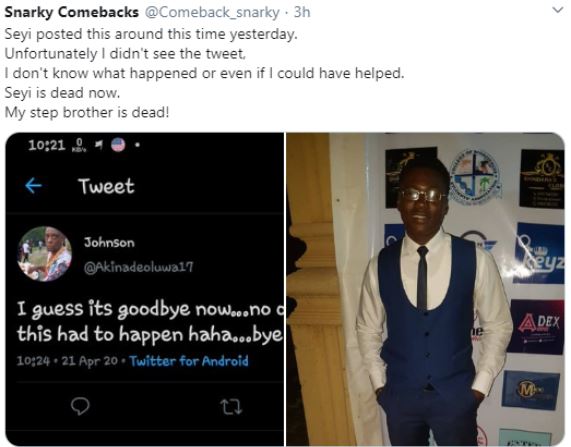 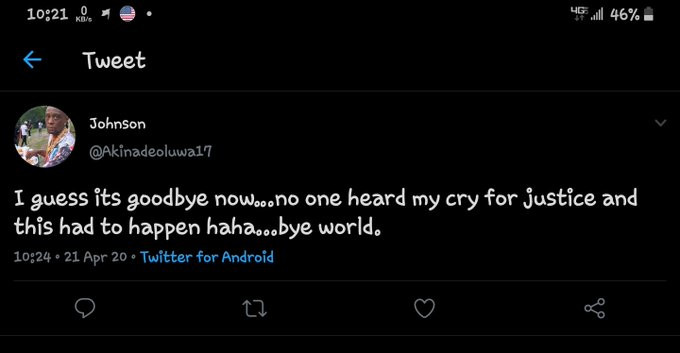