The governor assured that people would be allowed freedom of movement for day- to- day activities. 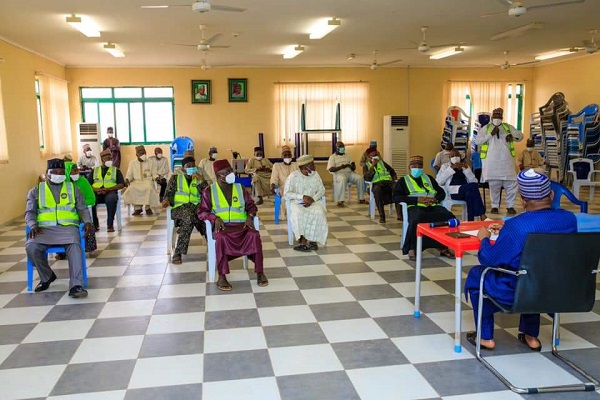 Kebbi Governor Atiku Bagudu has declared that there would be no lockdown in the state.

He assured people would be allowed freedom of movement for day- to- day activities but must observe all precautionary measures against COVID-19 pandemic.

The Governor disclosed these at a meeting with the State Task Force Committee on COVID-19 to reappraise the efficiency and effectiveness of the proactive measures put in place as preventive strategies against the spread of the corona virus, at medical center kalgo kebbi state.

The Governor commended the task force for living up to expectation, saying the government would concretise its operation for desired results.

The governor announced that the Federal Government has allocated three truck-load of food items to the state, comprising 2,262 bags of 50kg rice, oil and sugar.

Bagudu also announced the Minister for Humanitarian Services, Sa’adiyya Umar would visit Kebbi to disburse the conditional cash transfer to vulnerable persons on behalf of the federal government.

He also stated that meetings with Islamic and religious leaders have been ongoing to look into the possibility of sponsorship of Ramadan Tafsir on radio and television conducted by Ulama in recognition of suspension of such congregational Tafsir and Tarawih prayers in mosques nationwide during Ramadan.

The governor therefore directed the Task Force to always engage the media on regular basis so as to avail the public more information on Covid -19 and intensify live programs in television and radio.