Among the injured was an officer of the Lagos State Fire Service who suffered major burns. 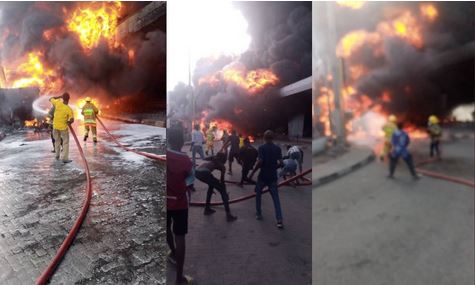 One person has died and 16 injured after an inferno engulfed an Oando filling station in the Obalende area of Lagos on Friday, Punch Metro reports.

It was gathered that among the injured was an officer of the Lagos State Fire Service who suffered major burns. He was subsequently transferred to the Lagos State General Hospital for treatment. Other injured persons sustained minor injuries and were treated on the scene of incident.

Speaking on the Obalende fire, some residents of the area said the incident was caused by a 45,000-litre tanker laden with Premium Motor Spirit (petrol) which caught fire.

City Round gathered that the tanker caught fire when it fell in front of the petrol station while descending the Obalende Bridge and trying to negotiate the Obalende Roundabout.

Eyewitnesses said the tanker exploded, causing fires that destroyed many structures in the area.

One of the eyewitnesses said, “The tanker was coming from the bridge. Probably its brake failed, so the driver steered it towards the Oando filling station.”

Other eyewitnesses who shared pictures and videos of the incident on social media suspected that the tanker belonged to the fuel station. It was learnt that officers of the Lagos State Fire Service and the Federal Fire Service later arrived at the scene to quench the rampaging fire.

In a preliminary report on the incident on Friday, the Lagos State Emergency Management Agency said the fire had been curtailed.

The report quoted the Director-General/Chief Executive Officer, Dr Olufemi Oke-Osanyintolu, as saying, “The agency received a distress call on the incident concerning a 45,000-litre capacity tanker loaded with PMS, which was ablaze, having fallen on its side directly in front of the petrol station.

“Efforts to combat the flames by the agency’s officials and men of the Lagos State Fire Service and the Federal Fire Service are ongoing. The fire has been curtailed and surrounding buildings protected.

“Unfortunately, the inferno resulted in a single fatality, 15 minor casualties and one major casualty who happens to be a Lagos State firefighter. He has been subsequently transferred to the Lagos State General Hospital for treatment while minor casualties received medical attention on the scene.”

Below is a video from the scene of the incident.