Drama As Guard Stabs Man To Death Over Facemask (Photo)


A young promising Nigerian man today met his untimely death after being stabbed by a security guard in Anambra. 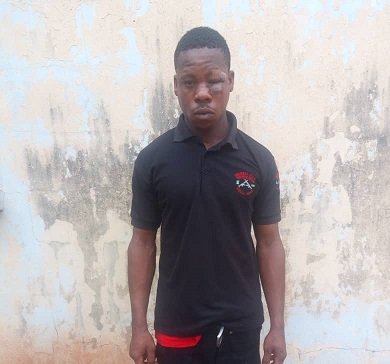 Cletus Chisom
A 22-year old man, Cletus Chisom has died after being stabbed to death on Monday by a security guard in a market in Onitsha, Anambra State.
According to TheNation, the suspect, Ibuchi Nwoju, a native of Abia state, but reside in Onitsha, allegedly stabbed the deceased on the chest with a knife following an altercation.
The Nation gathered the sister to the deceased was at the market with the mother to purchase some items when the suspect confronted her for failure to put on a facemask.
The mother was said to have later bought the facemask for the daughter after the suspect insisted she would only be allowed access to the market with a facemask.
Trouble was said to have started after the girl reportedly rushed home and mobilised her elder brother who came to attack the suspect.
The Nation however learnt that it was during the brawl that the suspect drew a knife and stabbed the deceased on the chest, leading to his death.
Confirming the incident, Police spokesperson, Haruna Mohammed said the Commissioner of Police, John Abang has ordered for immediate transfer of the Case to State CID Awka for discreet investigation.
He said: “Today being 4/5/2020 at about 8:45am, Police operatives from Okpoko Division in Onitsha arrested a private Security guard attached to COCA-COLA Market Onitsha, one Ibuchi Nwoju ‘m’ aged 26 years of Asa village, Abia State but reside in Onitsha, Anambra State.
“Suspect allegedly had an altercation with one Cletus Chisom ‘m’ aged 22 years of Ekekwe Street Awada and stabbed him with a knife on his chest.
“Consequently, victim became unconscious and was rushed to Goodnews Hospital Onitsha where he was confirmed dead on arrival by a medical doctor.
“Corpse was deposited at Toronto Hospital Mortuary for autopsy.”
Top Stories