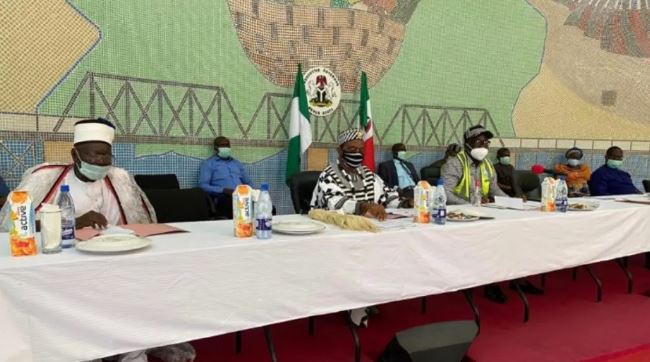 Benue rulers
Benue State Security Council, on Monday, suspended three traditional rulers.
Their suspension was as a result of violent land disputes in Ushongo and Gwer East Local Government Areas of the State.
A statement by the Governor’s Chief Press Secretary, Terver Akase said Ortom announced the suspension while briefing newsmen on Monday.
Akase stated that the decision was taken after an expanded meeting of the Council.
He identified the district heads as those of Gwer East, Chief Peter Ikyum of Ishough and Chief Ager Kuhe of Mbasombo, as well as a kindred head from Ushongo.
”A high powered panel headed by Tor Kwande, Chief Ambrose Iyortyer and supported by Tor Sankera, Chief Abu King Shuluwa as well as second class chiefs from Ushongo, Buruku, Mbakor and the Secretary, Tiv Traditional Council would look into the remote and immediate causes of the clashes between Mbasombo and Ishough districts,” he said.
According to him, the Council also asked the Tor Tiv, Professor James Ayatse to set up a committee to probe the veracity of the allegations leveled against the suspended traditional rulers and recommend appropriate sanctions.
Ortom also disclosed that an elder, Abagena Ityav had been identified to be behind criminal activities in Gwer East.
He directed security agencies to interrogate and prosecute him if found culpable.
Speaking on the lingering crisis at Ityo-Mu, Makurdi Local Government, Ortom said Council had restructured the earlier committee headed by Secretary to the State Government, Professor Anthony Ijohor, SAN, to include other members and remove those suspected to have vested interests, in order to find lasting solution to the crisis.
The committee includes Tor Kwande, TorJechira, Tor Gwer, Tor Lobi and Ter Makurdi.
Others are Security Adviser to the Governor, Commissioners for Land and Justice and Permanent Secretary Bureau of Internal Affairs who doubles as Secretary of the Committee.
Ortom also stated that the Security Council discovered criminal elements behind the crisis between Ukum and Katsina-Ala Local Government Areas and urged security agencies to go after the perpetrators.
The Council commended the peaceful disposition of people of the two local government areas and security agencies for enforcing and implementing the ranching law in the state.
He, however, urged Benue people to look inward by exploring agriculture to produce food for consumption, commercial purposes and be their brothers’ keepers.
Top Stories