A man and his friend who teamed up and murdered a businesswoman in Ogun state have been arrested. 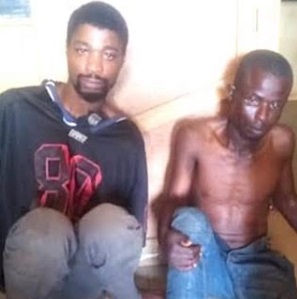 The suspects after they were arrested
A commercial vehicle driver, Gbenga Ogungbemi, and his friend, Tosin Olbamoyo, have been arrested for allegedly killing a businesswoman, Evelyn Ebere, and stealing her N400,000.
They were arrested by men of the Ogun state police command.
A statement by the state police command spokesperson, Abimbola Oyeyemi, said Gbenga who usually takes the deceased to Ire-Ekiti where she buys palmoil, connived with his friend to kill her so they can steal her money.
While on their way to Ire-Ekiti, Gbenga stopped on the road, dispossed Ebere of her N400, 000, and killed her with the help of his friend, Tosin. The suspects then dumped Ebere's body inside the bush along the Sagamu-Benin Expressway.
Oyeyemi said an investigation was launched following a report about Ebere's disappearance. The anti-kidnapping unit of the command embarked on intelligence and technical-based investigation which led to the arrest of the suspects in different locations.
“On interrogation, Gbenga informed the detectives that he is the driver of a Toyota Carina car with number plate AGD 107 GU, with which he was hired to convey the victim to Ire-Ekiti on a charter arrangement, where she intended to buy 26 kegs of palm oil.
He stated further that he was accompanied by his friend, Tosin Olobayomo, on the journey. While on the road, they both decided to dispossess the woman of the money she wanted to use to purchase the palm oil, consequent upon which they drove her into a bush along the Sagamu-Benin Expressway, where they dispossessed her of N400,000.” he said
Oyeyemi said the suspects decided to kill the victim because she knew Gbenga.
“Since the deceased knew them very well, being Gbenga’s regular customer, they decided to kill her and dump her corpse in the bush. The remains of the victim have been recovered in the bush along the Sagamu-Benin Expressway and have been deposited in the General Hospital morgue for autopsy.” the statement read
The police spokesperson added that the suspects will be arraigned in court once investigation has been concluded.
Top Stories