One of the suspected murderers of Pa Reuben Fasoranti's daughter's has tried to escape from hospital after contracting coronavirus. 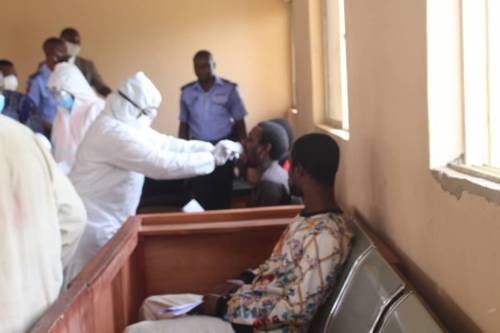 The suspect when he appeared in court

According to SaharaReporters, Adamu Adamu, one of the prime suspects in the murder of Mrs Funke Olakunri, daughter of Pa Reuben Fasoranti, on Tuesday attempted to escape from the Infectious Disease Hospital where he is currently being treated for Coronavirus.

Adamu, who is standing trial alongside three others, was arraigned before Chief Magistrate Victoria Bob-Manuel at the Akure Magistrate Court last month.

A police source confirmed the incident to SaharaReporters on Wednesday in Akure.

He disclosed that the suspect had been adopting different tactics in a bid to escape from the hospital.

According to the police source, Adamu had already been "chained to a bed" at the facility to avoid him escaping.

"We noticed that each time the suspect took permission from nurses to ease himself, he would stay for a long time in the toilet.

"But we have tightened security around the Infectious Disease Hospital and also drafted more people to the facility," the police source said.

When contacted, Mr Tee-Leo Ikoro, spokesperson for the Ondo State Police Command, said the police have drafted more personnel to the facility to ensure the suspect did not escape.

He added that the police will protect the suspect until he recovers to face trial on the murder case.