A web-designer was shot on the jaw by a trigger-happy policeman aiming for a driver. 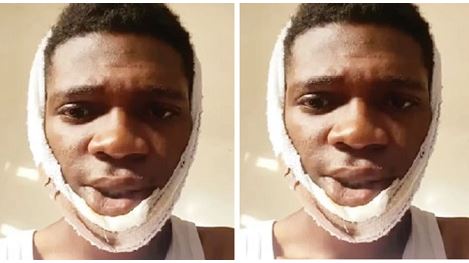 A website designer, Martins Omaruna, has been wounded after a yet-to-be-identified policeman shot him in the jaw.

Punch correspondent gathered that the policeman was angry that the driver of a commercial bus conveying the victim almost hit him during a stop-and-search at the First Junction area of Benin City, Edo State.

The policeman was said to have aimed his gun at the driver and opened fire, however, the bullet hit Martins in the jaw.

The 24-year-old Martins, who told our correspondent that he could no longer eat or talk properly as his jaw had to be stitched, demanded the arrest and prosecution of the trigger-happy cop.

Recounting his ordeal, Martins stated, “There was traffic around the First Junction area of Benin on Friday, May 1, 2020, due to the checkpoint that was mounted there and the driver of the commercial bus that was conveying me tried to avoid the traffic and in a bid to stop him, one of the policemen stood in front of his bus and because the driver stopped abruptly, the bus almost hit him.

“The policeman got angry and shot at the driver, but the bullet pierced through my jaw and immediately the cops at the checkpoint realised what had happened, they took to their heels and left us to our fate. It was a good Samaritan, who took me to the nearest police station to report the incident and from there, I was taken to the Central Hospital, Benin, from where I was referred to the University of Benin Teaching Hospital.

“My jaw was stitched at the UBTH; I cannot eat or talk well with my lips. I’m in pain. I want the policeman who shot me to be found and prosecuted, because he has given me a lifetime scar.”

Martins’ mother, Helen Omoruna, who lamented the amount she had spent since the incident happened, also called for the arrest and prosecution of the cop.

She stated, “The police said I should be keeping the receipts of the medical bills, nobody is taking care of the bills, I don’t have money, I am a widow trying to survive with my children and they have not arrested the policeman who shot my son.

“I don’t know why the policeman would shoot my son; if he wanted to stop the bus, he should have shot at the tyre and not at a human being. I want justice to be served.”

Punch Metro learnt that the matter was reported at the Adesua Division.

“The person, who shot the young man, is not by any means related to the Nigeria Police Force, Edo State Command. It was between the vigilante group and the Nigeria Security and Civil Defence Corps and the matter was reported at the Adesua Division, where investigation is ongoing.”