Horror! Woman Poisons Her Husband To Death, Chops Off His Manhood In Nasarawa


A woman has been nabbed after she reportedly killed her husband by administering poison to the man. 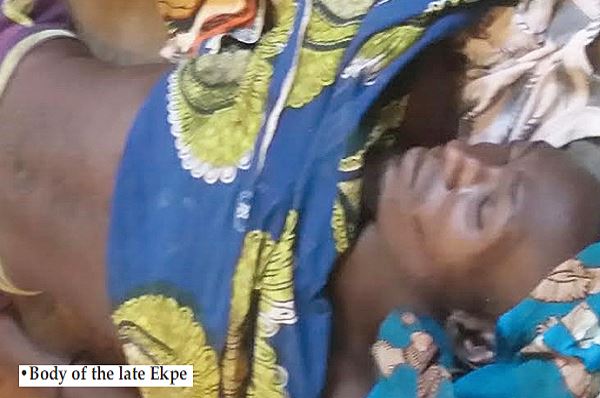 An eight-year-old marriage has ended on a tragic note in Zumbagwe, a remote community in Karu Local Government Area, Nasarawa State. Thirty-three-year-old Janet Ekpe poisoned her husband for allegedly dating her best friend and watched him die slowly and painfully.

Besides allegedly dating her best friend, Janet also accused her husband, Sunday Ekpe, of starving her of sex while satisfying her friend with same. Janet recalled that she had got used to having marathon sex with Ekpe since they got married only for him to slow down after her second child and later withdrew completely.

She said she grew tired of her husband giving excuses night after night as to why he was no longer able to deliver in bed and even telling her on occasions to fantasize about the good old times in order to satisfy her sexual urge.

Matters came to a head when Janet realised that her husband had fallen in love with her best friend who happened to be a widow. She came to the conclusion that her husband no longer had time for her because his attention had shifted to her friend.

She reasoned that the best way to deal with the situation was to terminate Ekpe’s life so that she would live a life devoid of psychological trauma. Hence she did not only kill Ekpe, she also ensured that she chopped off his manhood, perhaps to forestall the possibility of her randy husband engaging another woman in an affair in the world beyond!

‘Why I killed him, chopped off his manhood’

In her confessional statement, Janet said she did not know that her late husband was dating her best friend until about three years ago.

She said: “We were married for eight years with two children. It was three years ago I discovered that my husband had fallen in love with my best friend, a widow, and had been dating her.

“Since then, he stopped sleeping with me; he began to  starve me sexually while satisfying my best friend.

“When we got married eight years ago, sex seemed to be the only thing on my husband’s mind. He was always in the mood.

“We would make love three or four times before morning, and when he woke up, he would be ready to continue.

“There were days he skipped work and we would spend the whole day making love.

“We had sex in the bathroom, in the kitchen and anywhere it caught our fancy in the house.

“I became used to constant sex through him and also became the envy of my close friends, including my best friend who he later fell in love with.

“Whenever we shared stories of our exploits in bed, my friends felt I had the best man and jokingly begged me to allow them to have my husband just for a day because their husbands could not satisfy them in bed.

“But shortly after we had our two kids, I began to notice his disinterest in sex with me and his performance level began to drop.

“While we were having sex on a regular basis before, it came down to two times in a week and later became so bad that we could stay for three or four months without making love.

“Initially, I was not bothered because I felt that he would come around it after the babies were weaned. But I was wrong. He began to starve me of sex for months on end.

“It got to the point that I would be begging him to sleep with me but he would rebuff my requests.

“At times, he would tell me I should relive the moments we had sex every day and wallow in that fantasy.

“When I pestered him further, he told me he was no more interested in sex as he had had enough to last him a lifetime.

“He even told me that sex is not food and that if I felt so sex starved, I should get a man to satisfy me.

“I reported the matter to our church and the pastor summoned him, but he could not convince our pastor.

“I reported the matter to his parents in the village and some of his relations around, but he ignored their invitation.

“Within this period, my husband started keeping late night, which was very unusual of him.

“Unknown to me, my best friend, Hellen, who is a widow, started keeping distance with me, while some of my friends started hinting that she and my husband were dating.

“I watched the way they acted and how happy he always seemed in her presence.

“I monitored them closely and caught them five times in a drinking joint in new Nyanyan.

“When I confronted him about it, he said I was being silly; so I decided to believe the whole story.

“The worst was the day I saw a text message from Hellen in my husband’s phone, thanking him for giving him the best sexual satisfaction ever in her life the previous day.

“I was devastated. I felt sick and angry.

“I was hurt that my own husband could do this to me.

“I went back to our pastor but my husband turned down the pastor’s invitation and even stopped attending church.

“At this point, he stopped coming back home most times and resorted to sleeping in hotels with Hellen.

“I felt like a single mum and it upset me. I confronted Hellen and told her she was hurting me and that their relationship was getting stronger while they were not taking my feelings into consideration.

“I could not stand the thought of them being so close.

“I used to love and trust my husband but he turned me into something I never knew I could become: a murderer. I killed him. I poisoned him and watched him die in our bedroom, painfully.

“I mixed a deadly, colourless, tasteless and odourless substance in his meal and drinking water which destroyed his intestines immediately.

“He cried and struggled uncontrollably after taking the meal. He gave up after an hour and I used a sharp blade and knife to chop off his penis, place it on his chest as evidence of what killed him.

“If your penis is the one that is giving you the audacity to have feelings for my best friend and refusing to listen to the advice of your parents and even your pastor, it is better to cut it off.

“Mr Sunday (Ekpe), a cheating, filthy, lying bastard, ought to die for me to live. I deserve to live because I am human and have blood flowing in my veins.

“These foolish men, you give them everything, yet they choose to fool around and play with your intelligence.

“I had monitored him closely and tolerated him for long and his end has come.”

Mr Adakole Onoja, an uncle of Ekpe, told our correspondent that the deceased man was not Godly in his affairs with Hellen.

He said: “When his wife reported the matter to me, I invited him to my house and told him the implications of his actions.

“You cannot completely starve your young wife of sex and resort to dating her best friend.

“Many people, including his parents in the village, his pastor and his close friends, interfered in the issue but he turned a deaf ear to them.

“Maybe that was how he was destined to end his life.

“His wife’s action may not be right, but she is a human being too.”

All the efforts made by our correspondent to reach Hellen on the phone yielded no result as her phone was repeatedly said to have been switched off.

Visits made to her hairdressing salon also yielded no fruit as the salon was locked up.