American President, Donald Trump has walked out of a press conference following hot exchanges with a Chinese-American. 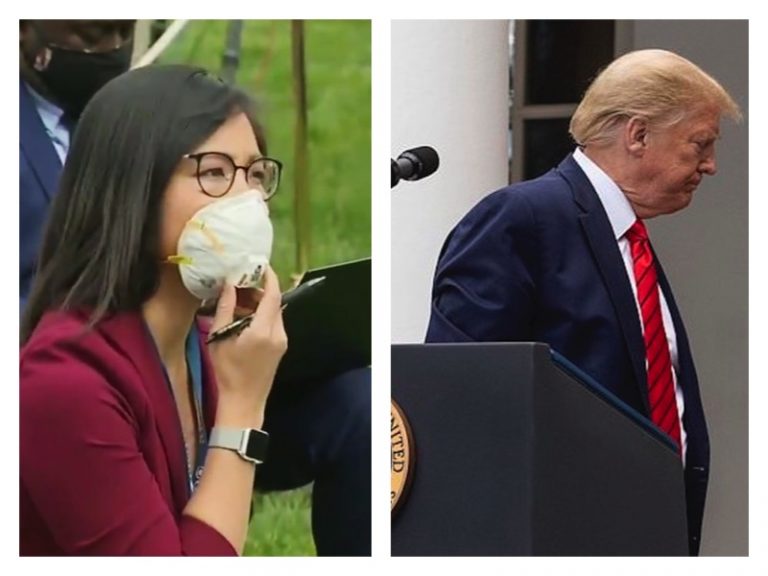 Trump walked out of the press conference after hot exchanges
President Donald Trump stormed out of his White House news conference Monday following combative exchanges with reporters Weijia Jiang of CBS News and Kaitlan Collins of CNN.
Jiang, a Chinese American, asked Trump why he was putting so much emphasis on the amount of coronavirus tests that have been conducted in the United States.
“Why does that matter?” Jiang asked. “Why is this a global competition to you if everyday Americans are still losing their lives and we’re still seeing more cases every day?”
Trump replied that “they’re losing their lives everywhere in the world. And maybe that’s a question you should ask China. Don’t ask me. Ask China that question.”
He called for another question, and there was no immediate response.
“Sir, why are you saying that to me, specifically?” Jiang asked.
Jiang, who has worked for CBS News since 2015, was born in Xiamen, China, and emigrated to the United States with her family at age 2.
Trump said he would say that to “anyone who asks a nasty question.”
“It’s not a nasty question,” Jiang said. “Why does that matter?”
Trump again asked for another question, then said, “Nah, that’s OK” and waved off CNN’s Collins when she approached the microphone.
“You pointed to me,” Collins said.
The president said, “I pointed to you and you didn’t respond.” Collins said she was giving Jiang the time to finish her questioning.
“Can I ask a question?” Collins said.
With that, Trump called an end to the news conference, held in the White House Rose Garden, and walked away.
It was the second time he would abandon reporters at a White House news conference.
Last month Trump did the same when reporters asked about his ‘disinfectant’ cure for coronavirus.
Source: AP
Top Stories