'You Are My Brother, My Prophet' - Cubana Chief Priest Hails Prophet Odumeje After Zubby Denied Him (Video) 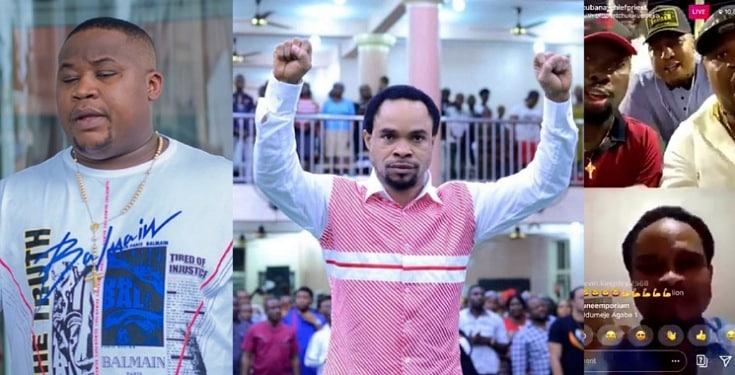 Cubana chief has showed love to controversial prophet Odumeje
Celebrity barman, Pascal Chibuike Okechukwu, popularly known as Cubana Chief Priest has showed massive love for controversial prophet, Chukwuemeka Odumeje.
This is coming after Nollywood actor, Zubby Michael denied the pastor.
During a live video session with the prophet, Cubana hailed him while accepting him as his prophet.
The self-proclaimed ‘liquid metal’ was also commended by Cubana for his works and being real despite the negativity from many Nigerians.
Meanwhile, Odumeje appears to have gotten himself in trouble, following a recent call by the Human Rights Writers Association of Nigeria (HURIWA) for his arrest.
The association in a recent statement urged the CBN governor to order the arrest of the prophet for his abuse of the national currency.
Watch the video below:

Cubana Chief priest and Odumeje The Lion on IG Live!