The victim was flogged over 36 strokes of the cane because of the post he made on Facebook against the Chairman of Afikpo North LGA. 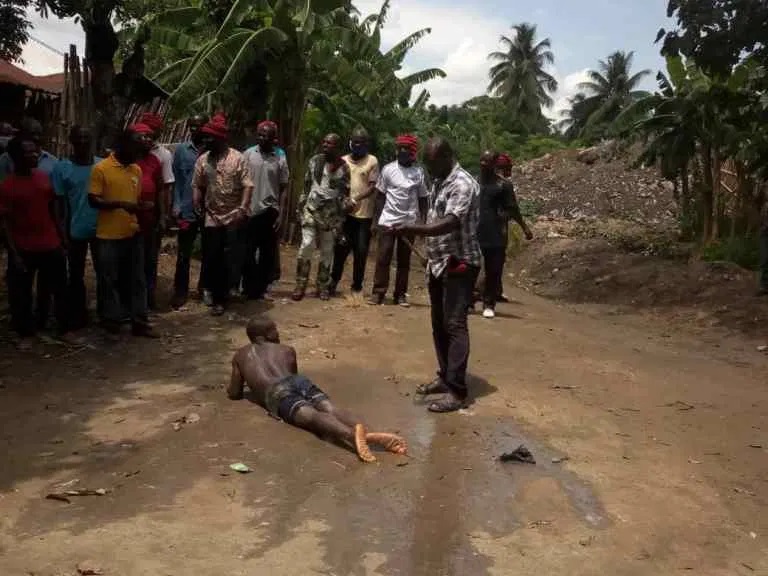 The pastor was flogged in public

According to Vanguard, the Ebonyi State Police Command, said it has arrested 10 suspects in connection with the flogging of one pastor Oko Chukwu Obeni, 30, of Ndukwe Amasiri Village in Afikpo North local government area of Ebonyi State.

It was alleged that the victim was flogged over 36 strokes of the cane because of the post he made on Facebook against the Chairman of Afikpo North LGA, Hon. Ogbonnia Oko Enyim and some key stakeholders in the area.

A source from the community hinted that the victim was supposed to be flogged 50 strokes of cane, if not for the timely intervention of his elder brother who paid cash (over 5,000) in exchange for the remaining 14 strokes.

“On 14/05/2020 at about 5:pm one Pastor Oko Chukwu Obeni ‘m’ age 30yrs of Ndukwe Amasiri village in Afikpo North LGA of Ebonyi State reported at Afikpo North Division that Isi Oru Age Grade led by one Julius Amadi Nyerere and deputized by one Eze Ogbonna ‘m’ all of the same address dragged him to the Ogo Playground in the area, tired his both hands to back and flogged him severally with canes which infected multiple injuries all over his body and poured him with filthy water.

“Following the report, the victim was immediately taken to the hospital for proper medical care and he is responding to treatment.

“Subsequently, The leader of the Isi Oru Age Grade, Mr. Julius Amadi Nyerere and Nine (9) others were arrested in connection of the case.

“Preliminary investigation revealed that the assault was as result of a post made by the victim in one of the popular social media platforms “Facebook”, condemning a particular action of Afikpo North LGA Council Chairman, Hon. Ogbonnia Oko Enyim and Commending the Traditional Ruler of the area and his cabinet over the decision taken against the Council boss for such action, that the LGA Council Chairman’s loyalist were allegedly angered by this post in the said platform causing them to take the laws into their hands thereby committing the heinous crime.”

According to her, the Acting Commissioner of Police, Ebonyi State, DCP Yekini A. Ayoku has called on the general public to remain calm as he has ordered a full-scale investigation into the matter. Ends