A lady took to Twitter to narrate how she was threatened by a lecturer because she refused to have s3x with him. 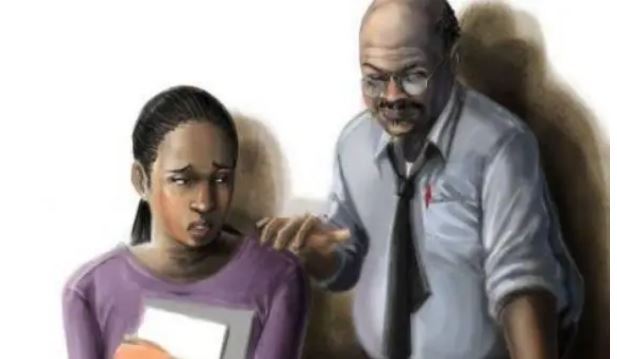 A Nigerian lady has narrated her experience with a lecturer who 'threatened to fail her in his course if she fails to meet him in a hotel'.

According to @_Faves, the lecturer threatened to make sure she returned for an extra year in school after she refused giving in to his demand for sex following their meeting in a hotel.

The Twitter user who revealed that she got same threats on her exam day, said the lecturer was unable to grade her exam as he got suspended and handed over to another lecturer in the school.

I’ll never forget the day a lecturer threatened to fail me if I did not meet him in a hotel in school. I was so afraid, so I planned with my twin to put my phone on recording. I took a backup phone just in case and started recording immediately

I got to his door. The man was like; “I’m not saying I want to fuck o, but you will be my baby girl. I like your shape, your breast, your height. You need to be taken care of and maybe when you finish school, we will marry.” Were was already planning future with me.

He told me to sit, I sat on the chair, he came close on another chair and held my hand. All this while, he was reducing his dialogue and I did not know why. Later, he said; “where is your phone,” I said it’s in my bag. He took the bag and put it in the wardrobe and closed it.

Were. Like he had done it before. Then he started touching my thighs. I wore denim on denim, so if he even wanted to rape me, it will give him stress. Idiot that said he is not having sex o, said he wants to see how big my breasts are. I should undress. Omo, I don dey shake.

I told him that i don’t want to do it and the next thing he said was; “maybe when you have extra year, you’ll change your mind.” Lmaooooo. I now told him that I cannot do anything without being drunk.

Ode, his prick was already rising. He ordered for Smirnoff Ice, but no one answered the call, so he went out of the room himself. Omo, I went to pick my bag; found out that he put clothes on it. I just sprinted out of the room. I had already put my mind that I will fail that semester. He even reminded me on Exam day. Lol... we sha wrote exam finish

There was a previous riot in the school and some lecturers who were part of ASUU protested, so the VC suspended them. This mad man was among. So, another person marked his paper. I got 67 B in the course... lol.... God saved me sha. 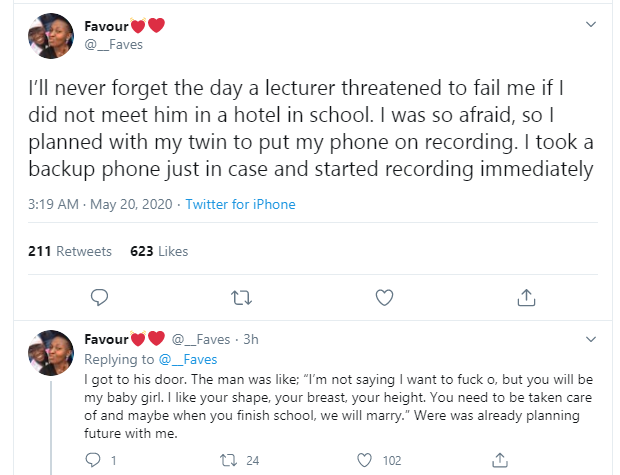