Ibrahim and his late brother were said to be indigenes of Amana maiKasuwa village in the Igabi Local Government Area of Kaduna State. 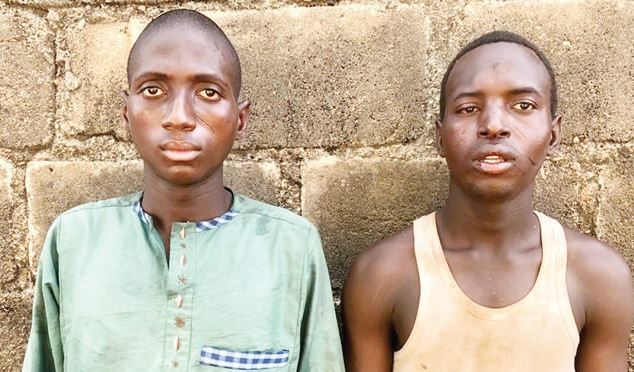 If someone had told Kadade Abdullahi that his blood brother would be the mastermind of his death, he wouldn’t believe. But that was exactly what happened to him around 11.30pm on March 21 when his younger brother, Ibrahim, hired some assassins to murder him, The PUNCH reports.

According to Ibrahim, who is currently cooling off his heels in police custody, the only offence Kadade ‘committed’ is that their father trusted him (Kadade) more than him (Ibrahim).

The suspect, 20, was recently arrested by operatives of the Inspector-General of Police Intelligence Response Team attached to Operation Puff Adder at Kateri Annex in Kaduna State.

Ibrahim and his late brother were said to be indigenes of Amana maiKasuwa village in the Igabi Local Government Area of Kaduna State.

It was in the village that the police operatives, upon intelligence gathering, arrested the suspect and one Hassan Amadu, 22, with the support of local vigilantes.

Speaking with City Round during the week, Ibrahim said he belonged to a gang which specialised in armed robbery, kidnapping and cattle rustling.

He stated that he hired assassins, with the help of his gang members, to kill Kadade because their father trusted his late brother more than him.

He cited that recently when their father sold cows worth N1.7m, the money was kept in Kadade’s custody.

He said this angered him, so he approached Amadu, a native of Rinji village in the Igabi Local Government Area of Kaduna State and explained to him of his intention to kill his elder brother.

The suspect said after the arrangement was concluded, the assassins invaded his late brother’s residence, where they killed him.

Ibrahim said, “My brother sold some cows for my father and made N1.7m. He came back and started making a noise about it. My father was happy about it and asked him (Kadade) to keep the money. I expected him to share the money between us but he asked my brother to take it to the bank the next day.

“I was so broke that day and asked my father for money. He started insulting me and asked me to learn to be responsible like Kadade. I was bitter and immediately called Haruna (Amadu) and told him about the money in our house.

“I told them (Amadu and the hired assassins) to come that night and kill my brother. I thought that his death would make my father allow me to control some of his businesses. That night, around 12 midnight, about five of them came. They knocked on my window as a sign to let me know that they were around. They searched everywhere for my brother and when they found him, they killed him as I instructed. My father was devastated but I consoled him that it was Allah’s wish.”

The suspect narrated that when the day broke, he went to the bush to meet the gang who told him that they only found N300,000 on Kadade.

He said, “I collected N100,000 as my share of the money since I was the one who brought the job. It was later that we learnt that my brother kept part of the money in a safe in the market.

“The police came to our residence and arrested our neighbours because they all knew about the money Kadade made from selling father’s cows. They were later released and my brother was buried and I thought the matter was over.

“I was surprised when the police came back with Hassan (Amadu) and arrested me. I am terribly sorry and hope that my family will forgive me. I now regret my action.”

Further narrating why he was embittered towards Kadade, Ibrahim said among his father’s children, his late brother always got special attention.

He said, “My father is married to four wives and has many children. I don’t know what is special about Kadade. I was never sent to a regular school but Arabic school in Kaduna. It was only Kadade that attended primary and secondary schools. My father said it was not necessary for the rest of us to go to school and that he wanted all of us to become farmers. Yet he kept calling us illiterates who could not speak English.”

Also speaking with City Round, Ibrahim’s accomplice, Amadu, said his father sent him out of the house when he was 15 years old to learn how to rear cows from one Alhaji Sani because his father had many sons and unable to train them all to rear cows.

Amadu said the agreement was that at the end of each year, Sani would give him a small cow until he got enough to leave and start his life.

He said it was in the process of rearing cows in the bush that he met one Haruna who exposed him to how to make money selling his master’s cows without him knowing.

Meanwhile, the police said they had launched a manhunt for fleeing members of the gang, adding that the suspects confessed to have committed armed robbery and kidnapping in Kaduna State.