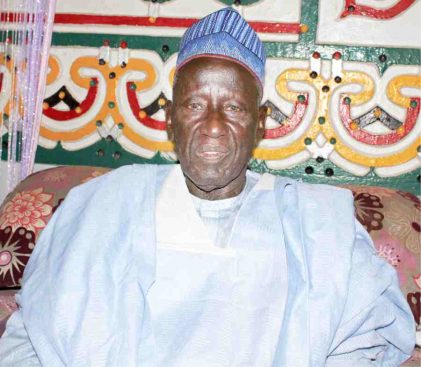 The Satin Bichi, Hakimin Dambatta, Dr. Wada Ibrahim Waziri, has passed on at the age of 89, PM News reports.

According to family sources, the prominent monarch and the district head of Makoda Local Government died Wednesday morning after a protracted illness related to old age.

The late monarch who was at one time the District Head of Makoda was born into a royal family and had his education early in Kano Middle School and passed out in the 1950s.

Late Wada Waziri was a veteran nursing officer who became popular under the AVM Hamza Abdullahi regime in 1984 when he served as head of operation of the then Kano State Environmental Sanitation Agency, popularly known as Ruwa-Ruwa.

During his lifetime, the frontline monarch Wada Waziri worked as a civil servant and later got involved in active politics.

Reacting to the development, Governor Abdullahi Umar Ganduje of Kano State has condoled with Waziri’s family, describing the deceased as one of the pillars of the traditional institution.

In a condolence message by his Chief Press Secretary, Abba Anwar, Ganduje said that his death was striking to the state, traditional and political leadership in the state. “It is with great shock and heartfelt feeling, that I am, on behalf of the government and good people of Kano state, commiserating with Bichi Emirate and the families of the late Sarkin Ban Bichi, Alhaji Wada Waziri, over his demise.

“His death was striking to the state, traditional and political leadership in the state. The deceased is one of the pillars of the traditional institutions even before his appointment as Sa’in Kano in the old Kano Emirate.

“Kano would forever remain appreciative of the contributions late Wada Waziri Ibrahim made to the development of the state and the nation in general.

“He was a great treasure as an elder, whose exemplary leadership qualities earned him all respect from his generation and the generation that follows. “Late Sarkin Bai’s peaceful posture in ameliorating any confused and frightening moments, as a renowned freedom fighter, was superb and exemplary.

“When it comes to fighting for social justice and equality before the law, late Sarkin Bai, was a turning point. He was a strong pillar to fall back on. He charted many courses in the quest for social justice, children’s rights, and liberty for the downtrodden.

“We urged his family members to continue following his footsteps of confidence, discipline, commitment, justice, logical thinking and reasoning, pragmatism, humility and above all, the fear and love of Allah in all their dealings,” the statement reads.