Seven members of the Indigenous People of Biafra (IPOB) have been reportedly arrested by a combined team of security agencies in Aba. 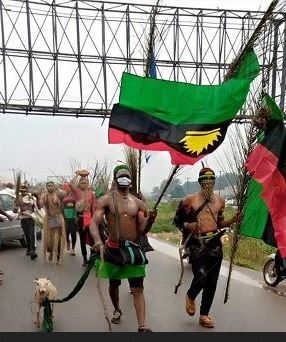 Seven members of Indigenous People of Biafra (IPOB) have been arrested by a combined team of security agencies after taking to the streets of Aba on Monday June 8, to protest against the "killing of Christians and Biafrans in the country".

Members of the proscribed group who were spotted with Biafran flags, charms and different insigna started off the protest from the popular Ala Oji Flyover in Ugwunagbo Local Government Area and later terminated at SAMECK junction of Ariaria International Market.

The Nation reported that some IPOB members were injured as security operatives engaged in shooting to disperse the crowd.

The Commissioner of Police, CP Janet Agbede confirmed the arrest of the protesters but couldn’t confirm their number.  She said;

“I am aware that some IPOB members were arrested, but I don’t know the actual number. They will be bringing them to Umuahia (Police Headquarters) tomorrow. By tomorrow, I will have the exact number of those arrested."