The girl narrated how she was lured into a room by the musician, overpowered and sexually violated. 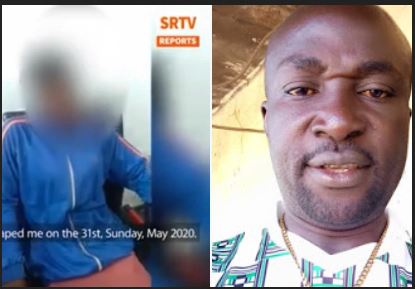 A fuji musician and President of the Performing Musician Association of Nigeria in Kwara State, Alhaji Maroof Adebayo popularly known as Marufu Alujo, has been accused of raping a 15-year-old girl on May 31.

Sahara Reporters reports that the 15-year-old girl who sells snacks for her mother, alleged that she was lured into a room by the musician who allegedly overpowered her and then raped her.

In a video obtained by SaharaReporters, the young girl while narrating what allegedly happened between her and the musician said;

When I got there, I met him in his wife’s room; he entered another room and asked me to come inside. I told him no but he insisted that I come in, saying he cannot harm me and that we were not strangers to each other.

He said he noticed that I have a challenge in school and he will help me and buy me a phone today. He asked me if I am a virgin and I told him yes. He asked if I am lying, I said no, that I am a virgin. He closed the door and pushed me to the bed. He raped me and while I shouted, nobody came out. He tore my cloth by the side and had sex with me.

I cried and went out. His wife asked me what happened and I told her that her husband raped me. She begged me and asked me to keep it as a secret and that’s how her husband does.”

According to the reports, residents of the area said the musician was notorious for perpetuating the evil act in different communities in Offa and Oyun local government areas.

"In the past, he is reported to have had serious problems with law enforcement agencies over similar cases, some of which had led to his incarceration at the state's correctional facilities.

He raped a 15-year-old girl in 2011, he forced the girl to play with his penis while he recorded her.

The matter is at the station but family and friends prevailed on the victim’s mother to drop the matter,” one of Adebayo’s neighbours told Sahara Reporters.

When contacted, Adebayo denied the allegation, saying he didn’t rape the girl. He said that though he was alone with the girl in a room, he did not assault or rape her.

Adebayo has been arrested and is being detained at the Kwara Police Command in Ilorin, the state capital.

Confirming the incident, the spokesperson of the Kwara state police command, Ajayi Okasanmi, said the police had commenced investigation into the case.

"The police is quite aware of the case, the Commissioner of Police has ordered a discreet investigation of the matter" he said.