Oba Lamidi Olayiwola Adeyemi has addressed alleged reports of fight between him and Governor Seyi Makinde of Oyo State. 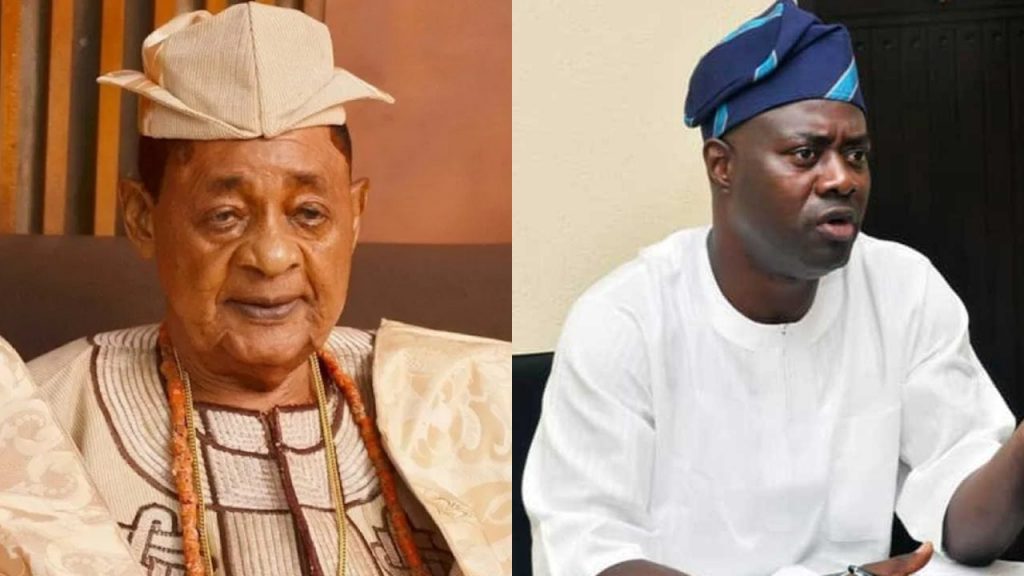 Alaafin of Oyo and Governor Seyi Makinde
The Alaafin of Oyo, Oba Lamidi Olayiwola Adeyemi, on Wednesday, stated that he bears no grudge against Governor Seyi Makinde of Oyo State over the location of the Police Mobile Force, Ago-Are in Oke Ogun geo-political zone of the state.
He spoke while receiving the governor who on a courtesy visit, stated that if he had any grudge; he would have communicated the same to the governor.
Makinde was in Oyo to commission the newly-renovated and equipped Primary Health Care Centre, Aafin Oyo.
Adeyemi, while speaking during the governor’s visit, urged the government to do everything it can to revamp the primary health care sector.
“Your Excellency, whatever you can do, do it. The conception of the primary health care system was developed in Russia. So, I understand too well that it is a policy that can be maintained and sustained if there is the will by the government and the people.
“We want good governance for the people and we will support you by God’s grace. We will continue to back you so that you can progress as you move this state forward.”
Makinde while reacting said that he had no knowledge of the letter said to have been written by the Alaafin.
He declared that he had, in September 2019, secured the nod of the Inspector General of Police to site a Mobile base in Oke Ogun to stem kidnapping and other crimes.
Makinde stated that that the effort to renovate and equip the PHCs was already on, with the remodelling and equipment of Oranyan Primary Health Care, Ibadan; ALGON Comprehensive Health Centre, Eyin Grammar, Ibadan and the Aafin Oyo PHC.
He noted that the state is providing 1 Billion Naira to start the campaign to revitalise the PHCs, while it has also put an agreement in place to find means, on a monthly basis, to continue the campaign.
“People may ask why we are not focusing on secondary or tertiary health facilities. Primary health care is the closest to the people and it is not every disease that should take us to secondary or tertiary health centres.
“Health is one of the pillars that this administration is standing on and primary health care is even more important because we have about 721 PHC facilities in Oyo State. I have visited a couple of them and majority of them are not in good condition. We just came back from Awe. The PHC there has been upgraded into a temporary isolation facility but once COVID-19 passes over us, then it becomes a standard primary health care centre that will serve the people of Awe.
“Out of the 721 health care facilities that we have, I don’t think 10 per cent of them are useful. So, we set a very tough task for ourselves. Within the time frame given to this administration, you will get, in every ward in Oyo State, standard primary health care facilities like this. We have commissioned that of Oranyan and another one at Eyin Grammar. We have this one coming on board and another one is in Awe but we need money to do this. We have been looking at the pocket of the government.
“To start with, we are providing 1 Billion Naira to start the campaign and we have also put an agreement in place to find means, on a monthly basis, to continue that campaign. We have asked the local government service commission, being its responsibility, that 7.5 per cent of its statutory allocation should be dedicated to primary health care centres.”
Top Stories